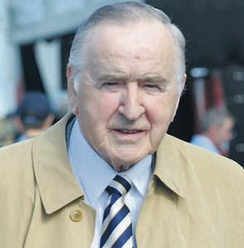 DUBLIN, Ireland - Former Taoiseach Albert Reynolds who served as Ireland's premier for nearly 3 years, has died at the age of 81.

Reynolds, who it was learned from his son in December 2013 had been suffering with Alzheimer's disease for a considerable time, served as Taoiseach of Ireland from February 1992 to December 1994.

He was nominated for the Nobel Peace Prize.

Current Taoiseach Enda Kenny extended his condolences to Reynold's wife Kathleen, and their children and extended family. "I also extend my sympathies to Fianna Fail leader Micheal Martin and to the Fianna Fail party on the death of their former leader," he said Thursday.

"Albert Reynolds brought an energy and drive to the development of business and economic growth during his tenure in office as Minister for Industry and as Minister for Finance," Kenny said.

"As Taoiseach he played an important part in bringing together differing strands of political opinion in Northern Ireland and as a consequence made an important contribution to the development of the peace process which eventually lead to the Good Friday Agreement."