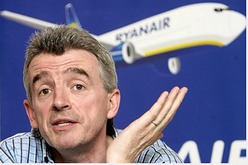 DUBLIN, Ireland - Irish airline Ryanair has big plans for Israel, and is not deterred by the instability and security issues surrounding the Jewish state.

The airline's CEO Michael O'Leary has planned to include Israel in his network for some time. however now he wants to build a major hub in the country and service Europe with a network of flights to and from major cities such as Tel Aviv.

Despite the recent closure of Ben Gurion International Airport in Tel Aviv, due to a rocket which landed close to the airport, O'Leary says a busy schedule of flights in and out of Israel to a wide range of destinations including Russia, Central Europe, Germany, Ireland and the United Kingdom is on the cards. Ryanair, which presently has bases at Dublin Airport and London Stansted Airports, is the largest airline operating in Europe, based on the number of passengers flown. O'Leary wants to make his Israeli version of Ryanair as big as the current operation in Ireland and Britain.

Surprisingly however, and unexpectedly, he is not getting much support for his plans from Israel. He believes the Israeli authorities are too protective of their national airline El-Al, and sees Ryanair proposing competition the Israeli airline can do without.

"We're actively talking to the Israeli authorities, but the difficulty is that once you go outside Europe you need to have, in this case, an Israeli air operator's certificate," O'Leary said Monday. "But it's still very much on the front foot for us. But the Israeli authorities have got much more nervous about protecting El Al from competition because of the recent events."

"What we're looking to do in Israel is something much bigger," said O'Leary.

"We want to serve markets all over Israel to Russia, central Europe, the UK, Germany and a lot of other markets," he said, "and we want to build a big base in Israel."

The Israeli national carrier El Al introduced its own low-cost carrier, known as UP, in March this year. The airline services Berlin, Budapest, Kiev, Larnaca and Prague, with flights to and from Israel.