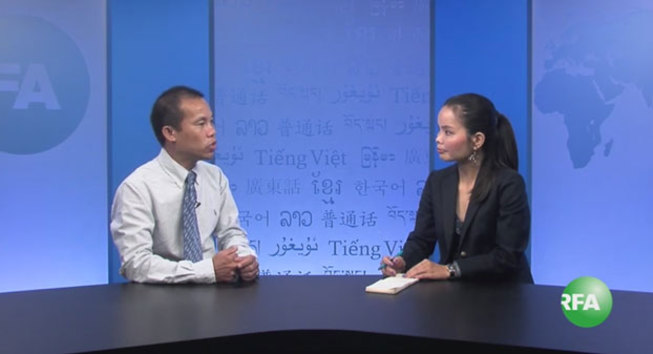 RFA: What should the outside world know about the plight of political prisoners in Vietnam?

RFA:? What happens to political prisoners who are put in solitary confinement?

Truong: They are treated like animals. Their food is tainted. They're put into a 2-4 meter square cell with another criminal prisoner, who serves as a special surveying camera assigned by communist party leaders.They are not allowed access to newspapers, books, TV or any other media. They don't get to receive letters or they have really limited access to letters.

RFA: What is the level of awareness of the plight of these prisoners?

Truong: Prisoners' families and Vietnamese people are not aware of this situation. Communist party leaders try to block this information by putting prisoners in solitary confinement. For example, whenever there is information leaked to the outside world, these prisoners will be transferred to another prison, often far away from their families. There is an unwritten rule in Vietnam under which political prisoners from the south serve their terms in the north of the country and vice versa. In a way, it limits the number of times the family can visit the prisoners. For example, when I got out of prison, I urged the society to take notice of the case of Mr. Dang Xuan Dieu, whose life was under serious threat, and could have died at any time. The international community raised their voice over his case so the officers moved him from a prison in Thanh Hoa (in central Vietnam) to Xuyen Moc (in southern Vietnam). We have to travel 1,500 km (900 miles) to visit him.

RFA: What is the goal of this visit to the United States?

Truong: I am urging the international community, lawyers, congressmen, as well as other international organizations, to put more pressure on the Vietnamese government to loosen their grip on those political prisoners and guarantee their rights.? I'd ask them to press for the release of prisoners such as (female social activist) Nguyen Dang Minh Man to be treated for their diseases, then they can serve their terms after being treated.

RFA: Are you worried that you will face government harassment after coming back from this trip?

Truong: Even before this trip, we (dissidents) are already on the government's watch list. Officers often come to my house to talk to me. I told them I considered these visits to be a kind of psychological harassment. My family wasn't harassed (yet) because of this trip. However, my colleague, pastor Nguyen Manh Hung, is not that lucky. They threw rocks at his house. I expect to experience some kind of harassment after coming back, but I'm willing to work with them on a transparent basis and I ask them to respect my rights and I hope they won't go out of their way to make it harder for me as the world is now watching them.