Russia Doesn't Quite Know How To React To U.S. 'Gayification' Movement 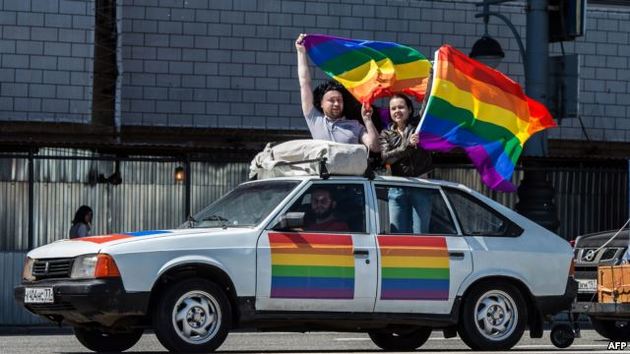 MOSCOW -- One lawmaker wants Facebook banned for being rainbow-flag friendly.

Another suggests that now is the time to move toward greater acceptance of the LGBT community.

And a prominent Russian Orthodox priest is warning that the United States is out to "steal your soul."

These are among the confused and immediate reactions in Russia to the U.S. Supreme Court's legalization of same-sex marriage on June 26.

As might be expected, the St. Petersburg lawmaker who is considered the architect of Russia's infamous "gay propaganda" law led the charge.

Vitaly Milonov called for a total ban of Facebook in Russia after many users showed their support for gay marriage by using the site's , which allows them to overlay their profile pictures with the LGBT flag.

In the wake of the U.S. ruling, the thought of Russian children possibly viewing a photograph tinged with the colors of the rainbow spurred Milonov to speak out.

"This is a gross violation of Russian legislation," he told the Russia News Service radio station. "Facebook does not have age restrictions. It's not possible to control how many underage users there are. Therefore, it is entirely normal to cut off Facebook on Russian territory."

It was not the only call to block Facebook.

On June 25, in anticipation of the Supreme Court ruling, a senator in the Russian Federation Council watchdog Roskomnadzor to block the social network for circulating "gay propaganda" in the form of emoticons and emojis.

Senator Mikhail Markhenko told Izvestia that on offer were tiny images -- popularly used by social media users to comment on posts -- showing men with men, women with women, and the rainbow flag. Such subliminal "propaganda" risked subliminally warping the minds of younger generations, he argued, and were thus incompatible with Russian law.

Aleksei Lisovenko, a municipal lawmaker in Moscow, on June 29 called for the rainbow flag to be added to a list of "banned symbols" and outlawed altogether.

"Since last century, the USA has been destroying entire states through color revolutions under the guise of 'democratization'," Lisovenko wrote on Facebook. "Now they've added to their arsenal 'gayification' -- a new method of interfering in the affairs of sovereign states."

The Facebook Celebrity Pride feature prompted Rishat Shigapov, director of an Internet marketing company, to try to fight flags with flags. Shigapov's answer was to develop a photo-editing application that can overlay photographs with the white, blue, and red of the Russian tricolor.

"I am a Russian citizen and proud of it," Shigapov profile page, complete with a Russian-flag avatar.

The application, pushed on social media under the hashtags pridetobestraight and pridetoberussian, has received generous media attention in Russia.

"We support the action with the Russian tricolor!" wrote Yelena on Instagram:

The Russian Orthodox Church, however, said that this issue goes far beyond mere patriotism.

Church spokesman Vsevolod Chaplin took the opportunity to warn of the dangers of "American-style democracy" and decried the Supreme Court ruling as an existential threat to godly Russian values.

"They might not tell you that they want to force you to accept such a godless and sinful thing as single-sex 'marriages'," Chaplin said in comments carried by Interfax.

Not everyone jumped on the ruling-bashing bandwagon, of course.

Konstantin Dobrynin, a senator in the Federation Council, on June 28 suggested that Russia could benefit by implementing the principles of "don't ask, don't tell," a 1990 approach toward homosexuals serving in the U.S. military that was repealed by President Barack Obama in 2011 on the basis that it was discriminatory.

Dobrynin suggested that, realistically, it is only a matter of time before Russia realizes it must take a more civilized approach on the issue and move toward greater acceptance of the LGBT community.

"For Russia, it is important not to turn away from the realities of time and not to fall into bearded and uncivilized fighting against gays, and to find a legal formulation that will provide balance on this issue between the conservative part of society and all the rest," he said.

Within hours, Milonov had denounced the senator as a "national traitor." He told Govorit Moskva radio station that "the next step will be that homophobia is a crime that people who speak in favor of traditional values must be taken away for."

On Russian-language Twitter, however, Milonov's unrelenting war on gay rights was a source of mirth.

"Deputy Milonov held out with all his strength, but love won," tweeted this user:

A Russian-language Twitter user under the handle StalinGulag offered a popular post noting the excessive media reactions to the thought of gay rights in Russia.

"Most important, is that for the world press the number 1 topic is Greece, not gay marriage. And Russia is the only one continuing to debate the sexual lives of adults."