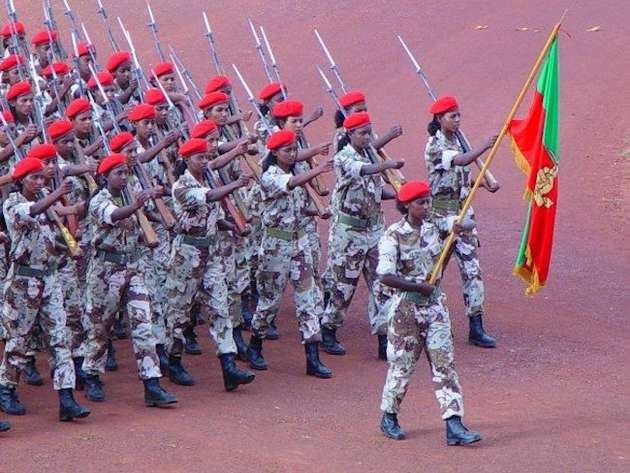 The conflict between Saudi Arabia and Houthi rebels in Yemen is drawing in participants from across the Red Sea.

Eritrea last month officially announced its "readiness to support the initiative without reservations and to extend its contribution to the alliance" of Saudi Arabia and its Gulf state allies. The typically tight-lipped Eritrean government, however, has not publicly elaborated on its military involvement in the Gulf.

A report from a U.N. monitoring group on Somalia and Eritrea in October cited a former high-ranking Eritrean official who said "400 Eritrean soldiers were embedded with the United Arab Emirates contingent of the forces fighting on Yemeni soil on behalf of the Arab coalition." The report added that Eritrea was allowing the Gulf countries to use the port of Assab and its airspace to take part in the fight.

In exchange for its involvement, Eritrea is receiving money and fuel, the report said.

The monitoring group also said the engagement might violate a U.N. resolution and arms embargo enacted in 2009 and extended in October to prevent Eritrea from playing a destabilizing role in the region. The resolution and the group's mandate are subject to renewal in December 2016.

In a statement issued Tuesday, Eritrea reaffirmed "strategic neighborly ties with Saudi Arabia" and condemned attacks on the Saudi Embassy in Iran, which was set ablaze following the execution of a Shi'ite cleric and others on January 3.

In an interview with Voice of America, an Eritrean official defended the country's right to aid its allies. While asking not to be named, he pointed out that Yemen is only 60 kilometers from Eritrea's Assab port and raised the specter of a growing threat of terrorism in the region.

"Eritrea will be the first country to be affected if any instability is to occur in the region," he said. "If ports are affected, the premium of insurance would increase, and so on. We have common interest in the security of the region."

The official also pointed out that Eritrea has most often been criticized for its isolation and frosty relationship with neighboring countries. Now, he noted, it is being criticized for becoming involved.

"This recent move by Eritrea should be commended, not shunned," he said.

Veteran Eritrea observers aren't sure exactly what to make of the move.

"There's a lot we don't know about what this cooperation looks like, what the arrangements look like," said Michael Woldemariam, an assistant professor of international relations and political science at Boston University. "But from what I can tell, the main element of this cooperation is the use of Eritrea, particularly the port of Assab, as sort of a basic logistical hub from which states like Saudi Arabia and UAE are able to launch their operations into Yemen."

The use of the port appears not to be limited to naval operations, Woldemariam said, adding it appeared that fighter jets were leaving Assab runways for sorties to hit Yemeni targets. As for the U.N. monitoring group's claim that Eritrean soldiers were embedded within UAE units fighting in Yemen, Woldemariam said he had not seen proof of that.

It is also unclear what Eritrea is receiving in return, but Woldemariam said the desire by Eritrea to build alliances makes sense.

"The U.N. monitoring group made some claims that Eritrea might be receiving some fuel, perhaps economic assistance, investment

- there's sort of a range of things that I would imagine the Eritrean government would be eager to obtain in return for their partnership," Woldemariam said. "It's quite likely that they are eager to garner diplomatic support from these countries as well. Saudi Arabia is an influential country, and one can imagine the ways in which the Eritrean government would like to get diplomatic support."

Eritrean President Isaias Afwerki recently met with King Salman of Saudi Arabia during a three-day working visit to discuss "regional and international developments of mutual interest to both countries."

A source who closely monitors the region, but who declined to be named because of professional concerns, said the partnership among Eritrea, Saudi Arabia and the UAE began as early as April after a falling out between UAE and Djibouti. The partnership raised eyebrows, since earlier allegations suggested that Eritrea was supporting the Houthi rebels and Iran on the other side of the conflict.

- which has seen thousands of young people flee and is in the process of an economic overhaul that includes the collection and reissue of its currency, the nakfa

- is in survival mode. Its new alliance with Saudi Arabia and the UAE should be seen in that light.