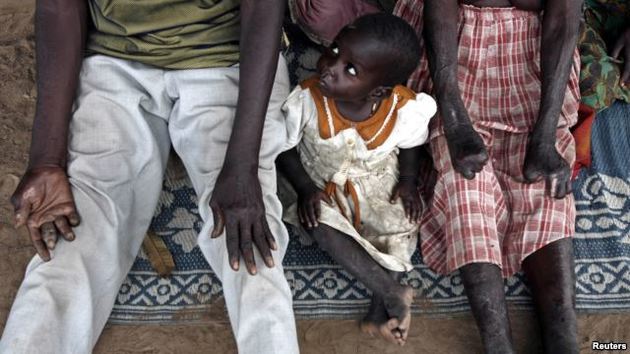 The 150 patients at the camp say for the past two years they have received no humanitarian aid because insecurity has prevented workers from accessing the area.

The camp, known in the local Dinka language as Pan ne Koch-Lojik, was set up in the late 1960s to host people suffering from leprosy, in a bid to prevent the disease from spreading to nearby communities.

Since 2006, World Outreach Ministry Foundation has been working with a local church called the Jonglei Worship Center to help the leprosy sufferers.

The church's founder, Pastor Nhial Dhuor, collected medicine, clothes and other items from South Sudanese living in Australia and delivered them to the camp.

"We support them, we treat the leprosy and we supply them with food and clothes," said Dhuor.

Speaking in Dinka, 60-year-old leprosy patient Madhor Maker said the camp's residents haven't received any support from NGOs since violence broke out in Juba in late 2013.

"The U.N.'s World Food program supported us sometime back, but since the outbreak of war our children fled the area and a few people remained here," he said. The residents have subsisted since then on spotty government food aid.

Maker, who is also the area's traditional chief, says the camp's residents face enormous challenges, including a lack of shelter since many of them are physically unable to build traditional small huts made of grass-thatched roofs and mud.

Leprosy affects the nerves and mucous membranes and causes discoloration of the skin, deformities, and disfigurement. The mechanism for transmission is not known, though scientists believe it is spread through coughing or contact with fluid from the nose of an infected person.

Camp resident Mary Ayen praised the Jonglei Worship Center for providing aid to those in the camp.

"Since the conflict broke out no other person came here to support us. The government provides us with food aid [but] sometimes we go for two months without food. Now we are happy indeed because our sons have visited us and supported us,"

The church is working to secure more funds to support the leprosy patients, said Dhuor. He says he hopes to construct a clinic for leprosy patients and a school for the camp's children.