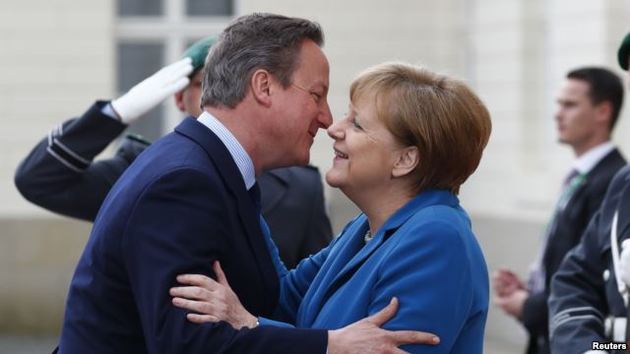 ROME - After days of torrid, bruising campaigning in Britain in the run-up to next month's referendum on whether to remain in the European Union, it would be understandable if the Germans decided it would be much better if the truculent British left.

Predictably, Leave campaigners have been invoking Britain's stand-alone World War II history and training their rhetorical guns on the Germans with inflammatory comparisons to Adolf Hitler. It began last weekend with the tousled-haired, former London mayor Boris Johnson dismissing the European Union as a German conspiracy to establish a Fourth Reich without firing a shot.

Other senior Conservatives supporting the Brexit added insult to injury with their rush to defend the indelicate Johnson from outraged Remain campaigners.

Lord Norman Lamont, a former Chancellor of the Exchequer (finance minister) mused on the Sky News television channel that it is a "fact there were fascist theorists who believed very strongly in a united Europe."

German leaders have remained largely silent in the face of the taunts, and not just because they have grown accustomed to British jibes about the Nazis whenever there's public debate in Britain about the European project. They want the British to stay in the bloc and fear any outspoken intervention in Britain's referendum campaign could backfire.

Last month, during a visit to London, U.S. President Barack Obama urged the British to vote to remain in the European Union, only to provoke sharp-tongued responses from Leave campaigners and Britain's press.

"For Germany the consequences of Brexit would be grave," according to Clemens Fuest, an economics professor at the University of Munich.

Germany has a lot to lose and nothing to gain.

First, a British departure would be felt in German wallets. Brexit could see German GDP fall by up two percent, according to a study by Bertelsmann Stiftung, a German research foundation. And the Germans would also have to make bigger annual contributions to fund the running costs of the bloc, $2.8 billion more a year.

: "Brexit" is an abbreviated term that refers to Britain's possible withdrawal from the 28-nation European Union. It is an adaptation of "Grexit," a reference to a possible Greek exit from the eurozone.

: On June 23, British voters will decide whether their country remains in the EU. The date was set by British Prime Minister David Cameron.

: Voters will be asked, "Should the UK remain a member of the EU or leave the EU -" The question was recommended by Britain's Electoral Commission and accepted by the government and parliament.

: To appease the Conservative Party and undermine EU opponents, Prime Minister Cameron promised to hold a referendum on the issue if he was reelected in 2015. Conservatives, now in the majority, have been split on the question of EU membership for some 40 years. Grassroots Conservatives generally favor leaving the EU.

: Proponents of a British exit believe it would free Britain from rules that are adverse to job creation and allow the country to choose its laws and trading partners. EU advocates contend Britain should maintain its membership in a bloc of like-minded countries, a move they say would help sustain the country's global influence and military and economic security.

: Citizens over age 18 can cast ballots on the Brexit question. This includes citizens in Britain and the Commonwealth of Nations, an intergovernmental group of 53 member states.

: Various pollsters are regularly tracking public opinion on the Brexit issue. The Economist has produced an interactive poll-tracker that tracks sentiment on a daily basis.

A study by DZ Bank, Germany's fourth largest bank, projects a British exit might cost Germany up to $51 billion by the end of 2017 as exports from Europe's largest economy would be hit. Last year, German exports to Britain surged by almost 13 percent to just under $103 billion, making Britain Germany's third most important trade partner after the United States and France.

But it isn't just the likely economic fallout that's preoccupying Germany's leaders. The possible political consequences for Berlin and the European Union as a whole are even more troubling. A Brexit could well encourage Euro-skeptics elsewhere within the bloc, they fear, including in Germany itself.

And for all the truculence of the British, and their inherent suspicion of the whole European project, which sees them swinging from aloofness to resentment, Britain's membership generally helps the Germans guide the bloc.

"The departure of the U.K., a vital ally, would make it even harder to manage this fissiparous club," argues Charles Grant, director of the London-based pro-EU research organization, the Center for European Reform.

"Brexit would leave the EU a less congenial place for many Germans, while also heightening resentment of Berlin's power elsewhere on the continent," he argued in an opinion article in Britain's Financial Times.

While Britain's Leave campaigners already think Germany is too powerful, German leaders fear, from some European perspectives, that would become a self-fulfilling prophecy, if the British exit. As the main eurozone creditor, Germany indeed can call many of the shots, and has done so when it comes to the handling of the euro crisis and imposing unpopular austerity on southern Europe's debtor nations.

But Germany doesn't have total power. Despite its colossal strength within the European Union, Germany could well find it harder to get its way without British membership, especially when it comes to ensuring the bloc remains free-market oriented.

Grant isn't the only analyst to point to a German worry that post-Brexit Berlin would find it harder to steer the European Union. For all of its differences with London over EU political integration and forging common EU security and foreign policies, Berlin would lose a key economic policy ally in the event of Brexit.

"For Germany, it would become harder [inside the EU] to champion free trade and oppose protectionism," argued Fuest.

With Britain, the less statist EU members, Ireland, the Czech Republic, Slovakia, the Scandinavian and Baltic states as well as Germany, are able to block proposals they don't like on the EU Council. Without Britain, they would fall short of the necessary 35 percent of votes needed to veto measures.

Brexit would also deprive Germany of an ally in trying to keep EU spending down.

"Thanks partly to the British, the European Union has less wasteful agricultural and fishery policies, a liberal single market, a commitment to free trade," he said. "Without the U.K., the EU will be less liberal, less efficient and less influential on the world stage," he warned.