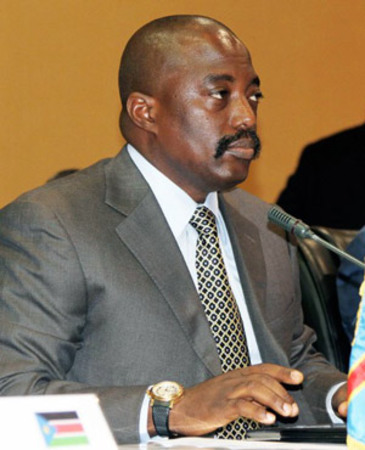 Washington - A simmering political crisis in the Democratic Republic of Congo that the US and its allies have been unable to defuse, is stoking fears in Congress that one of Africa's largest countries is on the verge of slipping into widespread violence.

Tension is building in the DRC over President Joseph Kabila's manoeuvring to avoid national elections and remain in office beyond his constitutionally permitted term, according to US officials and members of a coalition opposing Kabila. The Obama administration has threatened to sanction anyone who undermines security and democracy in the country.

Yet that warning has so far failed to sway Kabila and members of his government, who've been accused of cracking down on political foes and activists in a bid to remain in power.

"It's a really dicey situation," said Senator John McCain, one of several lawmakers who've used their oversight role to draw greater attention to conditions in the DRC. McCain last month wrote to the Congolese ambassador in Washington, telling him that the advocacy group Human Rights Watch has documented dozens of cases of arbitrary arrest and unlawful detention. Congolese authorities have even threatened to kill those who've challenged Kabila, McCain wrote.

A delegation of Kabila's political opponents travelled to Washington earlier this week to urge the administration to act quickly against Kabila and his top aides. Sanctions could include freezing the overseas assets of key figures and a ban on travel visas.

"President Kabila has deliberately sabotaged the electoral process," said Olivier Kamitatu, a member of Congo's national assembly and Kabila's former minister of planning. Kabila, he said, has instituted a "policy of chaos and fear".

Kabila is committed to holding fair and peaceful elections, but a host of logistical and financial problems have to be resolved first, Balumuene said. Among them is securing nearly $600m in foreign aid that Congo needs to set up polling stations, acquire voting kits, and more. The US is planning to provide $313m in financial assistance to Congo in 2017.

"Kabila can't change the constitution to stay in power," Balumuene said. "It's impossible."

Since mineral-rich Congo won independence from Belgium in 1960, there has never been a peaceful, democratic transition of power in the country and the window for Kabila to ensure the first orderly changeover is closing rapidly.

More than a decade after Congo's back-to-back civil wars ended, the country's east remains perpetually in discord. Scores of militias and armed groups are blamed for violence against civilians, and nearly 2.7 million Congolese are internally displaced as a result, according to figures compiled by the United Nations.

But a bad situation could soon become worse. Congo's sprawling borders reach nine other African countries, and an implosion in the vast nation could spark instability in its neighbours.

Secretary of State John Kerry stressed the importance of timely elections in Congo to Kabila last month when the two met briefly on the sidelines of the signing of a global agreement on climate change at the UN.

Leaders of African nations often have entrenched themselves in office, a practice that fuels corruption and leads to autocracies. Mobutu Sese Seko ruled Congo from 1965 to 1997. In neighbouring Uganda, President Yoweri Museveni was sworn in last week for a fifth term.

Kabila, 44, has represented an opportunity to break that mould - to be a "model for his peers", Thomas Perriello, the US special envoy for Africa's Great Lakes region, told the Senate earlier this year. But without a clear political path forward, Perriello said, Congo could fall into a violent, destabilising crisis.

Kabila has been in office since 2001, taking over less than two weeks after his father, President Laurent Kabila, was shot by a bodyguard in the presidential palace. He was elected president in 2006 and again in 2011. Kabila is barred by Congo's constitution from a third term. He is supposed to leave office in December.

Senator Edward Markey of Massachusetts, the top Democrat on the Foreign Relations subcommittee on Africa, said in a February letter to Kerry that "public perceptions that President Kabila is clinging to power have created a very real risk of violent upheaval or even renewed warfare". At a May 10 hearing, Markey asked a senior Obama administration official if the time had arrived for sanctions.

Linda Thomas-Greenfield, the assistant secretary of state for African affairs, said the administration is "looking very, very actively at sanctions as they relate to those who are involved in violence".

Sanctions are not an elixir, however. The United States has maintained sanctions since 2003 against Zimbabwe's President, Robert Mugabe, his wife Grace, and members of his government for human rights violations and election rigging. Mugabe, 92, is still in power after 36 years and is the world's oldest head of state.

Kabila's opponents are urging swift action while there is still time to organise elections.

Kalombo said he left Congo last year for his own safety after publicly opposing Kabila's attempts to remain in office.