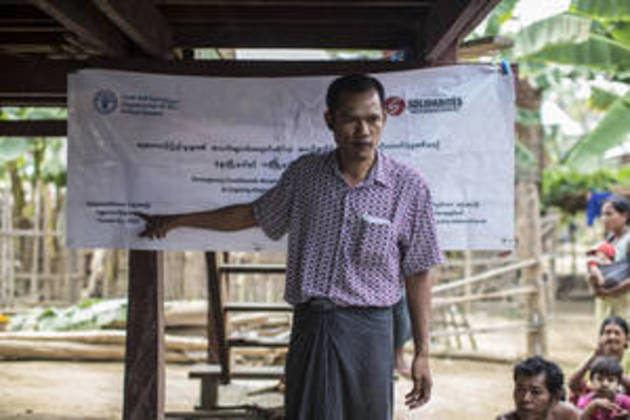 24 May 2016, Istanbul - A major new partnership to better prepare countries and communities for disasters is being launched today atthe World Humanitarian Summitas a united response to a continuing rise in humanitarian emergencies.

The new global partnership for preparedness (GPP) is led by the Vulnerable Twenty (V20) Group of Ministers of Finance of the Climate Vulnerable Forum, which represents 43 high-risk developing nations, in collaboration with a number of UN agencies. These include the Food and Agriculture Organization (FAO), the Office for the Coordination of Humanitarian Affairs (UNOCHA), the United Nations Development Programme (UNDP) and the World Food Programme (WFP) as well as the World Bank's Global Facility for Disaster Reduction and Recovery (GFDRR).

The partnership will strengthen preparedness capacities initially in 20 countries, so they attain a minimum level of readiness by 2020 for future disaster risks mainly caused by climate change.

Roberto B. Tan, Treasurer of the Philippines, representing the chair of the V20, says that the goal of the partnership with the international community is to make sure that when disasters strike, the mechanisms and support are in place so people can get back on their feet as soon as possible, therefore minimizing the impact on development gains and preventing uncontrolled humanitarian crises. "We know investment in preparedness saves lives and dollars and thus makes financial and economic sense. If we plan ahead, we will create a situation where instead of wave after wave of climate-driven natural disasters destroying what gains communities have made, they can pick up their lives again as soon as possible. Crises such as those from natural disasters and effects of climate change should no longer spin out of control," Treasurer Tan says.

United Nations Development Program Administrator Helen Clark says: "This partnership will help countries to reach an adequate level of preparedness for disasters and other shocks. The aim is to save lives, safeguard development gains, and reduce the economic impacts of crises. Importantly, this also safeguards development gains, which can otherwise be lost with each disaster, she said. "This new partnership puts at-risk countries in the driver's seat and brings together the work of development and humanitarian actors in a coherent way."

Stephen O'Brien, United Nations Under-Secretary-General for Humanitarian Affairs and Emergency Relief Coordinator states: "Extreme weather and other shocks shouldn't become major humanitarian disasters if we better anticipate and plan for them ahead, and reinforce local response capacity. The global preparedness partnership led by countries most at risk of climate change through the V20 provides a key opportunity to make this happen".

Laura Tuck, Vice President for Sustainable Development at the World Bank adds: "At the initiative of theVulnerable Twenty Group of countries,we are joining UN agencies to support a global preparedness partnershipto help build strong national and local institutions and ensure that planning and financing for preparedness are integral parts of countries' disaster management frameworks."

"The world's population that depends on farming, livestock, fishing and forests for their food and livelihoods, are highly vulnerable to natural disasters, whether provoked by extreme events such as storms, droughts, floods or earthquakes. Agriculture remains a key economic activity for millions of people across the developing world and the bedrock of food security," said FAO Director-General Jos Graziano da Silva. "This new effort will help build up the resilience of rural communities and boost national capacities to prepare for problems and respond effectively to disasters when they occur," he added.

"As climate change increases the frequency and intensity of natural disasters, there is a need to shift from a focus on crisis response to taking anticipatory actions to manage risks. The global preparedness partnership recognizes that predictable finance and strengthened government capacity are essential for saving lives and reducing the cost of responding to disasters", concludes Ertharin Cousin, Executive Director of the UN World Food Programme.

The partnership will become operational later this year and seeks to provide the initial 20 countries with support to achieve: