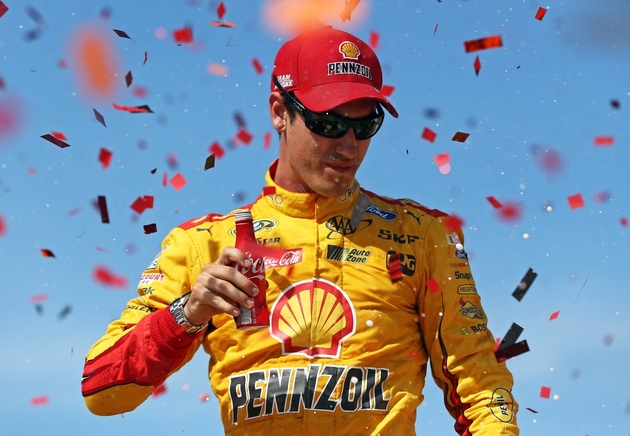 Eventual winner Joey Logano nearly crashed his Penske Racing Ford in Turn 1 at the start of the Sprint Cup race in Michigan on Sunday.

For the next 400 miles, which included quite a few hits of the wall in addition to Logano's near miss, every driver was a low downforce rider at some point, sailing out of control.

"I went down into Turn 1 the first lap and I thought I was King Kong," said Logano, who led the field at the start after winning the pole. "I drove down in there and about crashed. That didn't work out so well. So I learned a lot from that one. It's just the cars are out of control. No doubt, they are out of control crazy."

At 215 mph corner entry speeds, drivers had to back off by 40 mph to get through the wide open corners of the D-shaped Michigan International Speedway. If they got a tow in the draft down the front straight, drivers carried an even bigger head of steam into Turn 1.

All of this was courtesy of a tiny rear spoiler and a shorter front splitter that radically reduced the downforce drivers could rely on at corner entry. The same set-up added speeds on the straights due to low drag. Plus, teams could not "skew" the cars with the rear tire and wheel set-ups, which reduced sideforce on the quarter panels in the corners.

That depended on who you asked. At least seven drivers hit the wall as a result of losing control themselves or as a result of getting hit by a driver who had lost control, all of which Logano referred to as "natural cautions." So if crashing confirms drivers are on the ragged edge, it must be a good system, right?

Not if you asked Dale Earnhardt Jr. He was knocked out of the race after contact from the Ford of Chris Buescher, who lost control of his front end in Turn 2.

"It's not a whole lot different than the other package," Earnhardt said. "I think we talk about packages too much."

Others who found the wall included Jeffrey Earnhardt (twice), Regan Smith and Ryan Blaney. Martin Truex, Jr., who led 392 laps in Charlotte, spun after a close encounter with the Chevy of Clint Bowyer, damaging the bodywork of his Toyota enough to take him out of contention after leading 10 laps. Jimmie Johnson was bashed by Trevor Bayne's slip-sliding Ford, which put his Hendrick Motorsports Chevy into the SAFER barriers.

If nothing else, the low, low downforce put a premium on three things: car preparation by teams, drivers adjusting to circumstances and midrace adjustments. Those elements comprise the sport's bedrock. So why not keep pursuing more of the same?

One element of pause concerns the winner. Including the Sprint All-Star Race, Logano has now won both experimental races. Logano ran first or second virtually the entire Michigan race. His Penske Racing teammate Brad Keselowski, who finished second in the All-Star race, came home fourth at Michigan. This raises the specter of what happened in Charlotte's 600-mile race, where one driver dominated the proceedings after figuring out the rules package.

The majority of the drivers seem to like the way NASCAR is headed. Tony Stewart, who finished seventh and ran in the Top 10 for all but for a brief mid-race interlude, was one of the believers.

"Today we got to drive the cars," said Stewart, who posted one of his best showings since returning from his back injury. "We got to make a difference in the car and manipulate things. That is what we have all been wanting."

Stewart then "mocked" the old set-ups provided by engineers that had cars practically on rails in the corners, making it difficult to pass.

"We are not running Mach 12 around here in the middle of the corner," he said. "I don't know what everybody else is going to say, but I thought it was pretty good."

Stewart, like many others, said NASCAR was headed in the right direction. This was in sharp contrast to last August in Michigan, when the sanctioning body experimented with a high downforce package, which slowed cars on the straights due to drag, but sustained lap times due to cornering speeds. That approach was soon abandoned.

Keselowski called for more attention to be paid to sideforce -- perhaps because his Penske team has the absence of "skew" figured out and he sees an advantage for his team if NASCAR subtracts more sideforce. Keselowski liked the idea that some drivers were crashing -- perhaps because that helps eliminate some of the competition for Penske.

"They are hard to drive and that causes accidents. I don't think that is a bad thing," he said. "It just means everybody is on the edge. You could really see that."

Unfortunately, a lot of empty seats were visible at the oval closest to Detroit and the surrounding auto manufacturing environs. The absent fans missed a lot of good racing, albeit a lot of it was for position behind the leaders.

The top three finishers -- Logano, runner-up Chase Elliott and third-placed Kyle Larson -- seemed unfazed by the experimental rules. While Logano was running first or second place, the other two were in the Top 5 throughout.

Rookie Elliott, who lost his bid for his first career victory when he missed a shift while leading on a re-start with 48 laps to go, led 35 laps en route to his best career finish for Hendrick Motorsports. Elliott's bid was further hampered by a fueling problem on his final pit stop.

So some things stayed the same. The clean air at the front was a real luxury. Execution was critical lest another driver step into the void. And pit crews played decisive roles.

All three of the front runners were gunning for their first victory of the year -- as well as the first ever for Elliott and Larson. The Top 5 did not include a Joe Gibbs Racing Toyota, none of which ran particularly well under low, low downforce. If nothing else, the one-race experiment helped create an opportunity for a different winner, which now includes 10 drivers with Logano's ascension to the Chase.