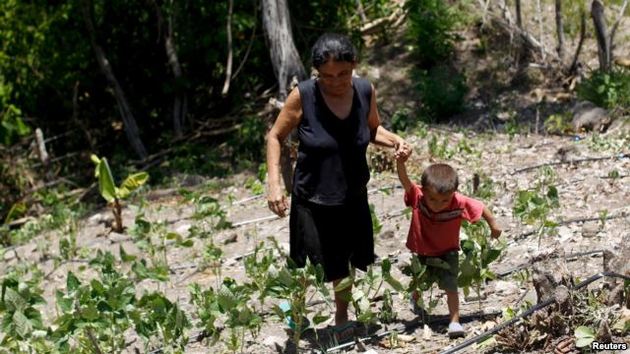 BOGOTA - Aid groups and governments in drought-hit countries in Central America need to boost the resilience of communities struggling to feed themselves and invest more in agriculture if the region is to recover from recurrent drought, the United Nations said.

Around 3.5 million people are in need of food aid in these three countries where prolonged dry spells since mid-2014 have decimated food crops and worsened hunger among the poor, the U.N. Food and Agriculture Organization (FAO) said Thursday.

"We need to change the traditional response strategy and tackle the structural causes of poverty and food insecurity in Central America's Dry Corridor, and not settle for simply mounting a humanitarian response every time an emergency situation occurs," said FAO Director-General Jose Graziano da Silva.

"We need to focus on resilience, inclusive sustainable development, and climate change adaptation," he said at a meeting of U.N. agencies gathered in Rome to discuss Central America's drought.

Widespread deforestation, soil degradation and a lack of water has exacerbated the impact of El Nino and climate change, which is bringing longer dry spells and more frequent floods, the FAO said.

The U.N.-International Fund for Agricultural Development (IFAD) said it was helping small farmers in El Salvador with training in soil and water conservation methods, as well as crop farming techniques better suited to dry regions.

Farmers in drought-hit areas have also been given help to build energy-efficient stoves and toilets that use less water.

The U.N. World Food Program (WFP) said it would give aid to 600,000 families struggling to feed themselves in Central America's dry corridor until the end of August, especially those expecting just one harvest rather than the usual two.

The WFP helped 1 million people living in drought-hit areas in Central America in 2014 to 2015, mainly through cash-based transfers.

Drought has slashed bean and maize harvests by up to 90 percent in some areas and forced families to cut meals.

The head of the WFP, Ertharin Cousin, said it is cheaper to invest in helping farmers adapt to climate change instead of dealing with the fallout from disasters.

"Data and experience clearly demonstrate that the costs of emergency response and rehabilitation after a disaster occurs substantially exceed the price tag for risk reduction and mitigation action taken before disaster strikes," Cousin said.