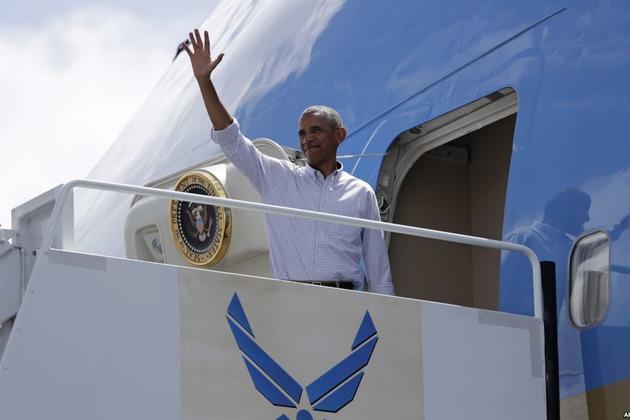 He will meet with Chinese President Xi Jinping ahead of the summit.

After the G-20 summit Sunday and Monday, the U.S. leader will travel to Vientiane, Laos, for the Association of Southeast Asian Nations and East Asia summits Tuesday through Thursday.

Obama, on his 11th trip to Asia as president, faces a long list of tough issues during the G-20 summit, where leaders of the world's 20 largest economies are expected to have a robust debate about how best to stimulate the sluggish global economy and push ahead against climate change.

Obama spoke Thursday in Honolulu to a group that included the Pacific Island Conference of Leaders, telling them, "No nation, not even one as powerful as the United States, is immune from a changing climate."

Obama has worked throughout his two four-year terms to bolster America's power and influence in Asia. The future of his strategic rebalance to the Asia-Pacific region and his legacy there are still uncertain, however.

Obama has said the foreign policy rebalance is critical to America's future security and prosperity.

Key meetings at the G-20 meeting will include talks between Obama and Xi, as well as between the U.S. leader and Turkish President Recep Tayyip Ergodan. Obama also most likely will speak on the sidelines with Russian President Vladimir Putin.

Obama will meet with British Prime Minister Theresa May on Sunday, a White House official said. It will be their first official meeting since May took office in July, following David Cameron's resignation after the British vote to leave the European Union.

White House officials said that while in Asia, Obama will repeatedly make "a forceful case" for ratification of the Trans-Pacific Partnership. The trade deal, signed by 12 Pacific Rim nations, is the economic foundation of the so-called pivot.

"TPP is a litmus test for U.S. leadership," said Ben Rhodes, deputy national security adviser. Without ratification, the U.S. "would be ceding the region to countries like China, who do not set the same types of high standards for trade agreements," he argued.

But whether the U.S. Congress will ratify the deal is very much in doubt during a presidential election year in which trade has been blamed for lost jobs. Both major party candidates, Republican nominee Donald Trump and Democratic nominee Hillary Clinton, have spoken against it.

Obama is expected to make a final push for ratification after the presidential election in November.

"The chances of [ratification] are growing slimmer by the day," said Douglas Paal, vice president for studies at the Carnegie Endowment for International Peace. "If we don't have that, the rest of the rebalance to Asia looks hollow."

The U.S.-China talks will cover American officials' concerns about Beijing's cyber activities, economic practices and aggressive actions in the South China Sea, where it has claimed disputed territory, raising tensions with its Southeast Asian neighbors.

With leadership changes set for next year, it is critical "to stabilize the U.S. relationship with China as they go through simultaneous political transitions in both countries," Paal said.

"I think the important thing for Obama during his meeting with Xi Jinping is to establish some red lines, things that we will not tolerate," he added.

White House officials said it would be the last such meeting between Obama and Xi.

Obama and Erdogan will discuss Turkey's crackdown since a failed coup attempt, which the Turkish president has blamed on elements within the U.S. Also on the agenda will be the fight against Islamic State, instability in Syria and the refugee crisis.

Possible talks between Obama and Putin are expected to focus on the conflict in eastern Ukraine and Moscow's role in Syria. The U.S. has urged Russia to persuade Syrian President Bashar al-Assad to abide by a cessation-of-hostilities agreement and allow the flow of humanitarian aid.

Obama will be the first U.S. president to visit Laos when he travels to Vientiane for the ASEAN and East Asia summits. He will hold talks with that country's leaders as part of the ongoing effort to build ties with people and develop more trade and investment.

After the meeting, the U.S. leader will deliver a speech on his Asia policy and his vision for America's future in the Asia-Pacific region.

"I think he'll speak to the fact that we've significantly upgraded our commercial and economic diplomacy in the region [and] our security presence in the partnerships that we're building, both with allies but also with emerging partners, on issues like maritime security and disaster response," said Rhodes.

He again will press for U.S. ratification of TPP during the remarks.

Obama also is scheduled to meet with the Philippines' new president, Rodrigo Duterte, to discuss an international court ruling at The Hague against China's territorial claims in the South China Sea.

The president will also seek to reassure Southeast Asian nations about the U.S. commitment to the rebalance.

But progress on the security and diplomatic fronts are not enough, said Matthew Goodman of the Center for Strategic and International Studies in Washington, where he holds the William E. Simon Chair in political economy and is senior adviser for Asian economics.

The future of the rebalance and Obama's legacy rest on TPP, Goodman said, and "if it doesn't get ratified, then I think his legacy will be seen as mixed, at best, in Asia."