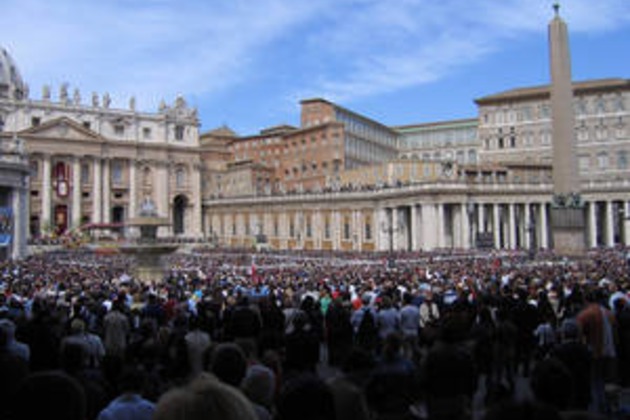 5 September 2016, Rome - Mother Teresa of Calcutta, who devoted her life to assisting the poorest of the poor, stands as an inspiration to all to work together to eradicate hunger and poverty worldwide, Pope Francis told FAO Director General Jose Graziano da Silva and WFP Executive Director Ertharin Cousin in a short meeting yesterday.

"Pope Francis encouraged us to keep up the good work and as a strong advocate of the fight against hunger and malnutrition he reiterated his full disposal to help", said Graziano da Silva. "Saint Teresa of Calcutta has taught us several lessons. While poverty can be relative, extreme poverty is an absolute condition. The poorest people are the same everywhere: they are homeless, hungry and don't have any income", he added.

The head of the Catholic Church, the first ever to hail from Latin America, has consistently lambasted hunger and poverty as an unnecessary scourge. In a mass attended by 100,000 people Sunday at the Vatican, Pope Francis declared Mother Teresa a saint and said she had shamed world leaders for the "crime of poverty" they had created.

"Pope Francis in almost every speech calls on the world to feed the hungry," noted Cousin. Hailing the WFP's staff for their courage in working in adverse and often harsh circumstances around the world, she added: "His voice helps ensure the world prioritizes the global challenge of addressing hunger and malnutrition."

An advocate of overcoming poverty to build peace

Born in 1910 in Skopje -- today Macedonia but then part of the Ottoman Empire -- Saint Teresa of Calcutta was widely recognized by her work with the poorest in India. In 1979, Mother Teresa was awarded the Nobel Peace Prize, "for work undertaken in the struggle to overcome poverty and distress, which also constitutes a threat to peace."

During her acceptance speech in Oslo, she urged all people to find and help the poor "right in your own home first."