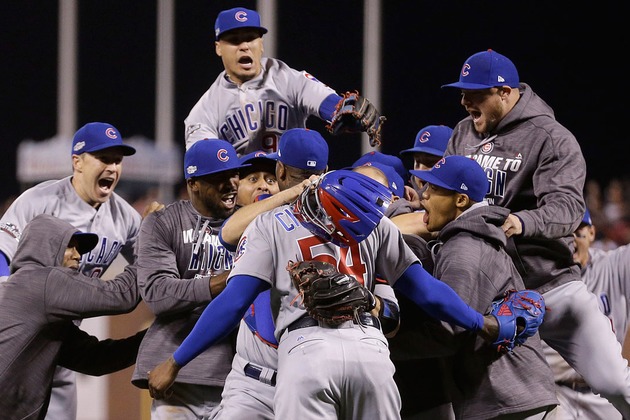 "It seems like we have been playing these guys for the last two weeks, just with travel and how intense these games are and stuff," Jon Lester said on Tuesday.

When the ninth inning began, with the Giants holding a 5-2 lead and Cubs hitters having gone 5-for-56 since the early stages of Game 3, not even the optimistic Joe Maddon was sensing any magic in the night air. Not against a team that had won 10 straight elimination games.

What was Maddon thinking when the Cubs came to bat in the ninth?

"Johnny Cueto at Wrigley Field," the skipper said, referring to the Giants' probable starter. "And I was telling the folks in there, if you ever looked at those numbers, they're not good for us. He's really tough on us. ... He knows what he's doing out there, and he gives us problems. So I'm happy to not having to face him in a winner-take-all game. That was it. I'm being very honest."

In typical fashion for a team as deep and balanced as any in the Major Leagues, six players (Kris Bryant, Anthony Rizzo, Ben Zobrist, Willson Contreras, Jason Heyward and Javier Baez) contributed to a four-run ninth inning that sent the Cubs to the NL Championship Series (Game 1 Saturday on FOX/FS1, time TBD) for the second year in a row.

Safe to say Maddon's outlook had changed entirely after Contreras' pinch-hit single off Will Smith tied the score, Brandon Crawford committed his second throwing error of the game and Baez's go-ahead single off Hunter Strickland.

Baez on advancing to NLCS Baez says the Cubs are excited to keep goingJavier Baez chats with Lauren Shehadi about his role in the 9th-inning rally, his defense and advancing to the NLCS

"I think as a group, obviously, it's two years in a row now that we're getting to this particular level," Maddon said after surviving champagne showers in his custom-made No. 70 wetsuit. "I think it validates on a lot of different levels the job that we have done to this point. I think if you're a player on this particular team within the organization, it's getting to the point now you want to expect to get to the postseason and you want to expect to get deeply into the postseason."

The Cubs don't know if they'll play the Nationals or Dodgers, with that NLDS set for Game 5 on Thursday (8 p.m. ET/5 p.m. PT on FS1), but they do know they're four wins away from capturing their first pennant since 1945 and eight away from their first championship since 1908. They've got more experience and confidence than last October, when they were swept by the Mets, and the stars seemed to be aligned for this to be their time.

Giants manager Bruce Bochy made the right call by pulling starter Matt Moore after the eighth inning. Moore had thrown 120 pitches, and Bochy wasn't asking much from his bullpen.

"I would like to think you're going to get three outs there," Bochy said. "We couldn't do it."

Since falling into a 2-0 hole against Dusty Baker's Reds in the 2012 NLDS, Bochy's teams had always gotten outs with their backs to the wall in October.

But there was trouble in the air when Bryant opened the ninth inning with a hard grounder off rookie Derek Law. The Giants had three of their infielders playing on the left side, but none of them could get to the ball.

"Bryant beat the shift," Bochy said. "He hit the ball right where the shortstop normally is, and of course the ground ball up the middle, that's a bad break."

The second reference was to Contreras' two-run single, which Smith let go past him in the hope an infielder would play it. Instead, it went all the way to Denard Span in center field. By then, a lot of people, Bochy included, were wondering if this might be the Cubs' year.

"Yeah, you do," Bochy said. "With the way the ball bounced that last inning, I hate to use the word destiny, but they have had a great year and that's quite a comeback they mounted there."

How big of a comeback? Cubs starter John Lackey has the most postseason experience of any active pitcher, and he'd have to check his scrapbook to know if he's seen anything to match it.

"I'm still trying to process what happened in the ninth there," said Lackey, who gave up three runs in four innings before Maddon took him out for a pinch-hitter. "That was unbelievable the way the guys grinded out at-bats and got that done. You see a lot of things in the playoffs, but that might be at the top of the list."

Maddon's best-in-baseball starting rotation is set to roll for the NLCS -- unlike whichever opponent the Cubs will face. The Dodgers probably can't pitch Clayton Kershaw until Game 2, the Nationals Max Scherzer until Game 3. The Cubs have home-field advantage at a ballpark that can be as noisy as it is iconic and they just beat a team that had won the World Series three times in the previous six seasons.

Chicago is loaded in every department, probably more than it appeared in this series. The Giants kept the Cubs in check throughout a four-game NLDS that featured three one-run games.

They threw a lot at the Cubs -- the greatness of Madison Bumgarner and Buster Posey, excellent work from Cueto and Moore, clutch hitting from Conor Gillaspie and Joe Panik -- and all it got them was one win.

Even that victory came after Bryant hit a ninth-inning home run to tie Game 3.

"We don't quit," Maddon said. "That's really what it comes down to. You hear that all the time, everybody says it, but you have to actually live it. And I have to tell you, I've seen it so many times from this group. That's a big part of our philosophy. And I like to keep things simple, and that's simple. ... We just play 27 outs."

Bring on the Nationals -- or the Dodgers. The Cubs don't care. They believe they're the best team in baseball, and they're ready to prove it.

Phil Rogers is a columnist for MLB.com. This story was not subject to the approval of Major League Baseball or its clubs.