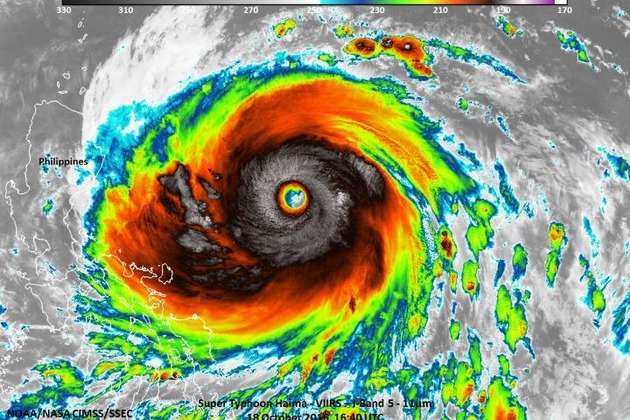 MANILA, Philippines - Super typhoon Lawin aka Haima hit the Cagayan region in the north Philippines killing at least four on Wednesday. The storm that maintained winds of up to 225km/h (140mph) destroyed houses, crops and uprooted trees that created roadblocks. Two of those killed were buried in a landslide and two others were buried in a small town in the mountain region.

Experts feared Haima would be as destructive as the catastrophic super typhoon Haiyan, which claimed more than 7,350 lives in 2013 but it weakened overnight as it hit the mountain ranges headed towards southern China.

Following the storm, North-Eastern Philippines is expecting a heavy infrastructural and agricultural damage to handle.

The storm waves reached to five meters in some areas, which is almost on the level of Tsunami.

National Disaster Risk Reduction and Management Council (NDRRMC) declared a no walk zone policy along the bay walk area in Manila due to strong high waves in coastal areas.

The Department of Social Welfare and Development stated that almost 15,000 people were in evacuation centers and more than 60,000 others were affected by the typhoon, as it traveled across the Philippines.

Villamor Visaya, a university teacher who lives in Ilagan, one of the most populated cities in the region said, "Rice and corn plants as far as the eye can see are flattened. Many houses were destroyed. I saw one school building crushed under a large tree. It was as if our house was being pulled from its foundations."

The epicenter of Typhoon Lawin was located 205 km west-northwest of Laoag City, Ilocos Norte at around 3p.m. Signal No. 2 is lifted over Ilocos Norte, Apayao, Abra, Ilocos Sur, and Calayan Group of Islands at 11a.m.

According to PAGASA Signal No. 5, 4, and 3 have been hoisted already.

Millions of people were on high alert when super typhoon hit the Philippines.

Jefferson Soriano, mayor of Tuguegarao, the capital of Cagayan where it made landslides, reported badly damaged schools and gymnasiums where people had sought shelter.

"They are calling for help because the roofs have been torn off. The problem is, our rescuers here are unable to go out and help," Soriano said.

President Rodrigo Duterte said that the authorities managed to make all necessary arrangements prior to the storm with tens of thousands of people evacuated.

Haima was the second storm to hit the Philippine islands in a week. The island nation witnesses at least 20 major typhoons each year as it is the first landmass to get hit following typhoon's creation over the Pacific Ocean.