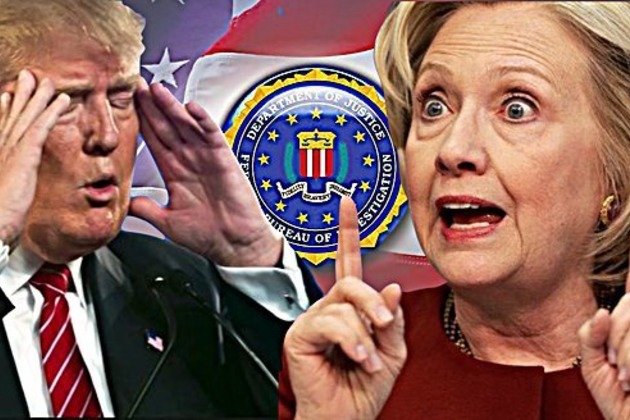 WASHINGTON, U.S. - After going back and forth for months, FBI Director James Comey on Sunday said there was no merit in the bureau's investigation into Democrat presidential nominee Hillary Clinton's emails.

The dramatic twist, just two days before the November 8 election, finally put the lid on the controversy which has dogged Clinton throughout the campaign trail.

Opinion polls just before the news broke gave Clinton a four to five-point lead over Donald Trump, who on learning of the agency's latest decision, once again, brought up his charges of a "rigged system."

At a rally in the Detroit suburbs, Trump insisted it would have been impossible for the FBI to review what has been reported to be as many as 650,000 emails in such a short time.

Intent on raking up the controversy, he added, "Hillary Clinton is guilty, she knows it, the FBI knows it, the people know it and now it's up to the American people to deliver justice at the ballot box on November 8."

And even as FBI cleared Clinton for the second time, Trump argued that the "investigations into her crimes will go on for a long time."

"The rank-and-file special agents at the FBI won't let her get away with her terrible crimes," Trump declared.

The Clinton camp said it was "glad" the lingering issue had been resolved, after the investigation has threatened to derail her lead over her Republican rival.

"We are glad to see that he has found, as we were confident that he would, that he's confirmed the conclusions that he reached in July," Clinton's communications director Jennifer Palmieri told reporters traveling with the candidate.

Trump, however, is not the only one who has raised questions on the FBI's handling of the entire investigation.

Some have questioned how the FBI director only nine days after reviving the investigation decided to end it just two days before American voters cast their ballots.

In just nine days, the FBI was able to complete its probe, even though when it was announced the case would be reopened, it was made quite clear investigators would be unable to process all the material before election day.
On Sunday, the FBI had sent a letter to U.S. Congress informing them that further review of Clinton emails found on the laptop of Anthony Weiner, the estranged husband of Huma Abedin, Clinton's top aide, didn't change their conclusion in July to clear her of criminal wrongdoing.

Since late October, when Comey dropped a bombshell that a review of Clinton's State Department email practices would be revisited after new messages were uncovered, "the FBI investigative team has been working around the clock," he said in a widely circulated letter to lawmakers.

"During that process, we reviewed all of the communications that were to or from Hillary Clinton while she was secretary of state. Based on our review, we have not changed our conclusions that we expressed in July with respect to secretary Clinton."

British Prime Minister Theresa May, meanwhile, called for a "calm and measured" presidential vote. She was careful to avoid giving any indication of her preferred winner in the Trump-Clinton showdown.

Markets worldwide were on an upswing following the announcement by the FBI.

Australian shares recorded their best day in close to four months as investors interpreted this morning's statement from the FBI as a sign of higher odds of Clinton winning the White House race tomorrow.

But the clearest evidence of an "anti Trump relief rally" was witnessed in the Mexican peso, which surged to a level last seen before Comey's letter to the Congress in October.

Trump's proposals – including a wall on the border with Mexico and renegotiation of NAFTA, a key regional deal – have caused particular concerns for the Mexican economy.

The dollar also jumped on Monday, while the euro was trading lower.

Markets have tended to see Clinton as the status quo candidate, and news favouring her bid often boosts risk appetite, whereas the stance taken by her Republican rival Donald Trump on foreign policy, trade and immigration issues is seen posing potential risks for global growth.

News of a revived FBI investigation into Clinton's emails had resulted in a nine-day losing streak for the S&P 500, its longest since 1980.

Michigan could be key swing state

Both presidential candidates are campaigning in Michigan the day before the elections, signs that the state will play a crucial part in the polls.

Along with 6-7 other key states, such as Pennsylvania, Ohio, New Hampshire and Florida, Michigan could be one of the deciding states.

Meanwhile, musician Ted Nugent made an obscene gesture on stage while warming up the crowd for Trump.

"I've got your blue state right here," Nugent said as he grabbed his crotch. "Black and blue."

The vulgar visual display came while the outspoken rocker insisted the "real Michigan" was a conservative state and should not be a member of the Democratic electoral firewall.

Nugent laced his introduction of Trump with profanity, saying Michigan had "the hardest working s---kickers mankind has ever known."

Michigan is clearly a big prize.

If Clinton were to lose Michigan on Tuesday, it would significantly affect her presidential hopes, and perhaps even end them.