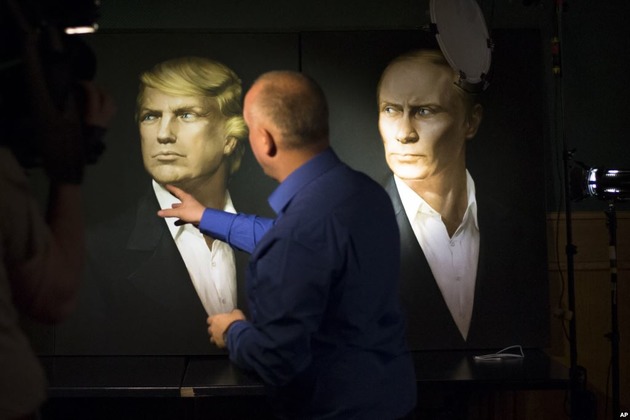 At an election watch breakfast at the residence of the U.S. Ambassador to Russia, John Tefft, various foreign and Russian dignitaries mingled as the results came in and took interviews with Russian and international media.

Trump's victory, defying polls that predicted Hilltary Clinton would win, came a surprise to most present.

Some analysts questioned how much of Trump's campaign rhetoric would translate into policy and whether, as president, he can improve U.S.-Russia relations.

"Too early to say," says Moscow-based political analyst and author on Putin, Maria Lipman. "Trump will be president effective end of January. He still has got to deal with the American congress. The American congress is not a crowd of Russia lovers, to say the least. It will depend on Russia as well," adds Lipman, "whether Russia will try and take advantage of this unexpected result of the election."

"They will welcome a chance to sit down early on with President Trump and discuss the relationship," says director of the Carnegie Moscow Center Dmitri Trenin.

But he was cautious about any dramatic improvement, after more than two years of frosty relations with the West over Russia's actions in Ukraine and Syria. "We are still in dangerous waters. I don't think that a change of president in the United States would mean a fundamental change of interests, clearly not. Change of policies or a correction of policies, probably yes. Which direction, we don't know."

On the streets of Moscow, Trump's victory was overwhelmingly welcomed by most Russians.

'Well, I think that was the best option for Russia than any other ( politician)," says student Irina. "Because they say he is not so critical about Russia."

Pensioner Elena voiced a rare dissenting opinion on Trump, saying while bilateral relations may improve under Trump, she thought him too emotional. "I have no confidence that he (Trump) is a person who is capable to manage the country in a stable way."

During the election campaign, Trump and Putin exchanged compliments and expressed interest in improving relations. On the thorny issues of Russia's military actions in Ukraine and Syria, Trump leaned to Moscow's positions more than his own Republican Party.

Leaders of other former Soviet states, such as Moldova, expressed simliar hopes that bilateral relations with Washington remain unchanged under Trump.

Russian state media clearly favored Trump in its reporting, criticism of Hillary Clinton was much more common. But Russian analysts say the attacks were more about disparaging Clinton, who was tougher on Russia, than necessarily wanting or believing that Trump could win.

"I think for some people (in the Kremlin) it was disbelief," says Trenin. "Some people have always maintained that if Trump looked like he was going to win, his victory would be stolen by the American elite. Now this has not happened. And that sends a message, including to the Kremlin, that democracy works in America."