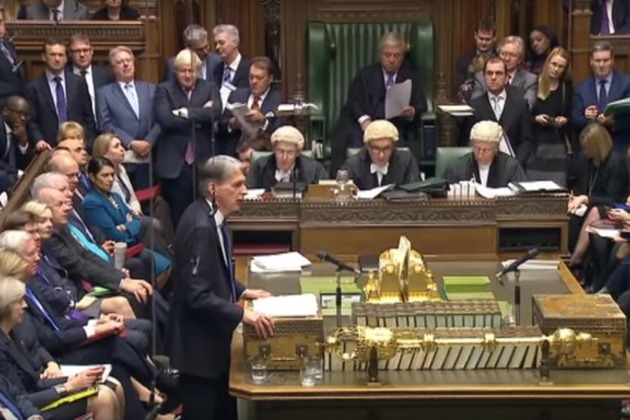 LONDON, U.K. - Chancellor of the Exchequer, Philip Hammond provided a detailed assessment on the effect of Brexit on the United Kingdom in the Autumn Statement at the Commons on Wednesday.

Hammond admitted that the national debt would increase by more than 90 percent of GDP, to 100 billion pounds.

In addition to that, Britain's exit from the European Union would cost nearly 226 million pounds a week in borrowing.

The statement indicates that U.K. will not be able to clear its deficit by 2020, with the economy set to be in 122 billion pounds deficit than previously thought. Hammond said the target would be to clear the deficit as early as possible after the original target of 2020.

The gains in the budget

More than three million U.K. families currently receiving universal credit will be able to save more when they join work. The National Living Wage will be revised to 7.50 pounds per hour from April next year.

The Chancellor revealed that more Housing White Paper would be released to tackle problems of the lack of housing stock in the U.K. He confirmed that the government would invest 1.4 billion pounds in 40,000 affordable homes. There will also be "relax restrictions on government grants" to "widen" the types of homes being built.

The budget also announced that letting agent fees would be banned. Landlords' would have to pay for fees that are incurred. It also meant that there would be no charges for lease renewal. Hammond said, "Landlords appoint letting agents and landlords should meet their fees."

For first time buyers, although there is no initial gain but he said the government remained committed to increasing funding for home building. There will be a 2.3 billion pounds 'Housing Infrastructure Fund' to provide infrastructure for at least 100,000 new homes in high demand areas along with 1.4 billion pounds fund for construction of affordable homes. In addition to that, ISA allowances will be increased to 20,000 pounds from 15,240 pounds by next year.

The government will also launch new 2.2 percent NS&I savings bonds that will allow millions to save up to 3,000 pounds. Also, the Personal Tax Allowance will be revised to 12,500 pounds by 2020 and would be increasing with inflation.

Loss from the budget

As Insurance Premium Tax is set to go up by at least 51 pounds or two percent from next year, the household expenses would be more. The increase in tax will impact home and motor insurance premiums.

Consumer Intelligence estimates an extra 15 pounds per year to the average motor insurance premium of 788 pounds which has already surged by 13.5 percent in a year. The drastic effect will be on young drivers as average premium for under-25 drivers will increase by 35 pounds.

Further, the accidental insurance processing will now be tough as the government has pledged to put an end to fraudulent insurance claims. Hammond said, "I can confirm that the government's commitment to legislate next year to end the compensation culture surrounding whiplash claims, a major area of insurance fraud, and that will save drivers and average of 40 pounds on their annual premiums."

The Autumn Statement revealed that Scotland would receive an extra 800 pounds under U.K. government's investment package of 23 billion pounds 'National Productivity Investment Fund' to deliver investment across the U.K. over the next five years.

As promised, the infrastructure spending programme has been launched. It would aim at boosting productivity in the U.K.

Andy Willox, Scottish policy convenor of the Federation of Small Businesses, said, "The Chancellor is right to get trade moving by addressing shortcomings in local infrastructure."

Hammond also announced that the government would work with SNP ministers to create a City Deal to benefit Stirling.

A similar deal for Edinburgh is set to be agreed soon, while Perth and Dundee are also under consideration.

The City Deals will allow the local authorities to make decisions on the spending to deliver economic growth and create jobs.

The Scottish Chambers of Commerce welcomed the City Deals in Scotland.

Chief Executive Liz Cameron said, "The Scottish Chambers of Commerce network has been lobbying the U.K. Government hard to secure the future of new and existing City Deals in Scotland and we are delighted that the Chancellor has not only committed funding to the existing deals but has also expanded consideration of the new proposals for Edinburgh, the Tay Cities and Stirling."

"City Deals are vitally important to securing the growth of Scotland's economy and delivering upon the needs not just of our cities but their wider regions. Their continued expansion is excellent news for Scotland," Cameron added.

In addition to the gains, Britain's decision to increase research and development spending by 2 billion pounds will benefit Scotland's universities and research centres too.

Wells and Mendip MP James Heappey welcomed the Autumn Statement and said, "The public finances are looking much less positive than they were a year ago and so this afternoon's statement was appropriately sober and unflashy."

"I welcome, however, that the new fiscal rules set by the Chancellor will continue to force the country to live within its means with deficit to be cleared early in the next decade. The additional borrowing in the meantime will at least be much cheaper as interest rates are currently so low," he said.

Adding, "In particular, I welcome the focus on investing in our nation's infrastructure. Poor connectivity discourages investment and limits productivity. The billions of pounds committed today to our road, rail, broadband and mobile phone networks are really welcome, as is the cash that will make our existing networks better protected from flooding."

Liberal Democrat leader Tim Farron also welcomed the statement. He said, "We've seen the gap between what we could've had and what we will have is a quarter of a trillion pounds over this Parliament. Can you imagine the number of nurses, doctors, social workers, teachers, police officers and soldiers we could be paying for if this government hadn't headed for a hard Brexit that nobody voted for?"

London Mayor Sadiq Khan was delighted with the budget too.

He said, "I'm delighted that we today took the first steps towards a major new devolution deal for London. London has a bigger population than Scotland, Wales and Northern Ireland combined, but we have far less control over how our city is run. Today marks the first step in our journey to give the capital a greater voice so we can protect jobs, wealth and prosperity and provide an extra incentive for economic growth."

However, Unite General Secretary Len McCluskey was not happy with the budget.

He said, "What is clear is that the Conservative party owes the UK people a huge apology. With debt set to soar, yet more promised targets missed and living standards still dropping, the truth is that Tory policies were a massive fraud. Six years of pain for the poorest, six years of sustained assault on our public services – and with more to come – have taken our economy and country backwards."

He said, "The country had expected a change in direction after those six wasted years. Instead we have seen further cuts to earnings for those in work through cuts to Universal Credit and a living wage increase that is lower than expected under the previous chancellor. This is a new Conservative leadership with no answers to the challenges facing our country following Brexit, and no vision to secure our future prosperity."

There was another tale in McDonnell's comments on Wednesday. As he took to the Despatch Box to respond to the government's spending plans, his party MPs turned a deaf ear on him. More than 20 of them were seen using their mobile phones, even as he continued unfazed.