Hate crimes against Jews in the U.K. records a dramatic rise 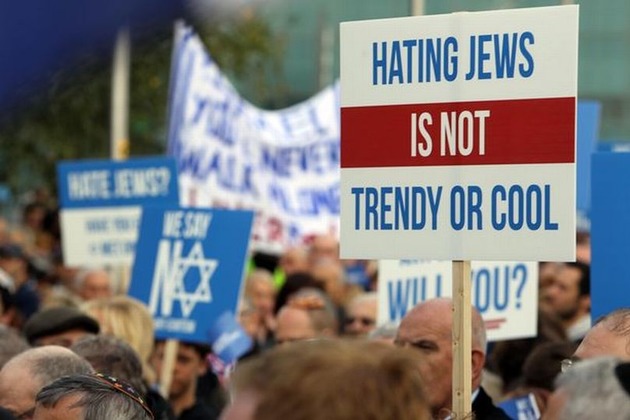 LONDON, U.K. - According to latest figures, a dramatic rise in anti-Semitic hate crimes has been recorded in London.

This is an increase of 65 percent compared to the previous year.

Elsewhere, there were 205 cases registered in Manchester, which is home to the second largest population of Jewish people in the U.K.

Of a total of 1,309 such incidents recorded across the U.K. last year, nearly three-fourths were recorded in Greater London and Greater Manchester.

The report released by a charity monitoring anti-Semitism, the Community Security Trust (CST) further indicated that Jews were targeted more than three times a day on an average last year.

Aside from this, 65 incidents of damage and desecration to Jewish property were also recorded through the year.

Further, there were 1,006 cases of abusive behaviour, both verbally and via graffiti and social media.

The report stated, "Rather than a single, sudden trigger event causing the 2016 record total, the high number of recorded anti-Semitic incidents is probably due to the cumulative effect of a series of events and factors that, taken together, have created an atmosphere in which the number of incidents recorded by CST has remained high over a sustained period of time."

Further, David Delew, CEO of CST said, "Whilst Jewish life in this country remains overwhelmingly positive, this heightened level of anti-Semitism is deeply worrying and it appears to be getting worse. Worst of all is that, for various reasons, some people clearly feel more confident to express their anti-Semitism publicly than they did in the past."

Commenting on the report, Sadiq Khan, Mayor of London said, "This significant rise in deplorable hate crimes against Jewish Londoners is shocking and deeply concerning. Any type of anti-Semitic offence is unacceptable in our city. We need to send the message far and wide that anti-Semitism can never be justified and we'll act to stamp out it out whenever it rears its ugly head. I have adopted a strict zero-tolerance approach to anti-Semitism and all hate crime. I want our police officers to have the resources and training they need to investigate hate crime fully, including online abuse, and to ensure we have neighbourhood police teams that understand and reflect the communities they serve."

He added, "We have increased the number of dedicated neighbourhood police officers across the capital and are setting up a new team of specialist police officers to investigate online hate crimes. This is a key part of my pledge to put victims at the heart of our policing plan in London."

Meanwhile, Amber Rudd has described anti-Semitism as a "deplorable form of hatred"

"It is vital we ensure the safety and security of our Jewish community and this Government will continue to do all we can to stamp out these vile attacks," she said.

He urged, "We must root out anti-Semitism whenever it takes place and wherever it exists, as a party and as a country."