Giants welcome more than 30,000 for FanFest 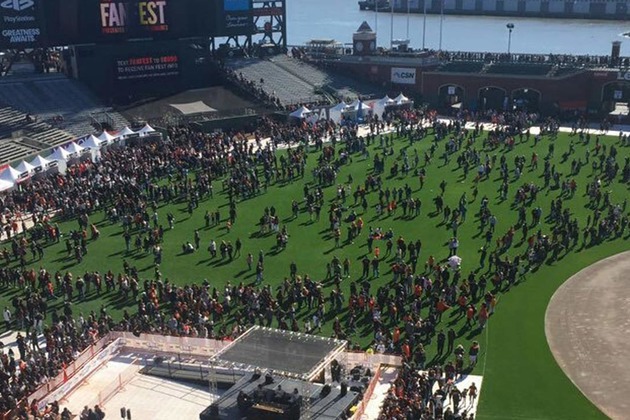 "Signing here," Melancon said, referring to the four-year, $62 million accord he reached with San Francisco as a free agent.

The audience for the question-and-answer segment also showered him with applause a few moments earlier, when all he did was confirm an interviewer's remark that he was drafted out of high school by the archrival Dodgers, but didn't sign with them.

Reciprocating the audience's appreciation, Melancon gestured toward the crowd at one point and said, "This is one of the things that sold me [on signing with the Giants]. This is fantastic."

Thus, it was a typical FanFest gathering. Starved for a glimpse of the Giants following their hibernation of nearly four months, more than 30,000 people swarmed ATandT Park to stand in autograph lines, watch field-level interviews and listen to the Q-and-A sessions, which annually are among the favorite FanFest activities.

As one fan said in prefacing a question, "Like everyone else here, I can't wait for baseball."

That meant dispensing with one last football-related item: the burning issue of whether 49ers legend Joe Montana or New England Patriots star Tom Brady is the better quarterback.

"I feel like I'm being set up here," said Melancon, who politely declined to respond.

Shortstop Brandon Crawford renewed the tradition of poking fun at first baseman Brandon Belt, who's one of the most glib players in this setting. In a discussion about the proposal to begin an extra inning with a runner on second base and nobody out, Crawford feigned dismay when he considered batting with Belt on base. Said Crawford in mock dismay, "Do you know how many RBIs you'd cost me?"

Responding to a Valentine's Day-related question, Crawford said that he and his wife, Jalynne, began dating years ago on Feb. 16. So they always celebrate Valentine's Day two days after everyone else.

Right-hander Derek Law took it upon himself to entertain the fans by breaking into a brief but polished rap routine. Said Law: "I just like singing and dancing. What's wrong with that?"

Hair, the long and short of it, came up in conversation. Crawford, who ties his locks in a "man bun," insisted that his 'do is low-maintenance. Asked how much time he spends on his hair in the morning, Crawford gestured to teammates Joe Panik and Belt and said, "It takes me less time, probably, than both of these guys." And before games? "It takes a little longer," Crawford admitted.

Big HUGE warm THANK YOU to everyone who came to SFGFest. We couldn';t do this without you. Now let';s play some baseball!!!! pic.twitter.com/G2XXzYA40a

Sporting close-cropped hair, Posey implied that he wanted to minimize his trips to his stylist: "I didn't feel like getting a haircut this winter."

Several questions led to ballplayers citing the importance of keeping various aspects of life in their proper perspective. Posey credited his wife, Kristen, with helping him accomplish this.

"She lets me know quick that I'm not as cool as I think I am," Posey said.

Chris Haft has covered the Giants since 2005, and for MLB.com since 2007. Follow him on Twitter at @sfgiantsbeat and listen to his podcast. This story was not subject to the approval of Major League Baseball or its clubs.