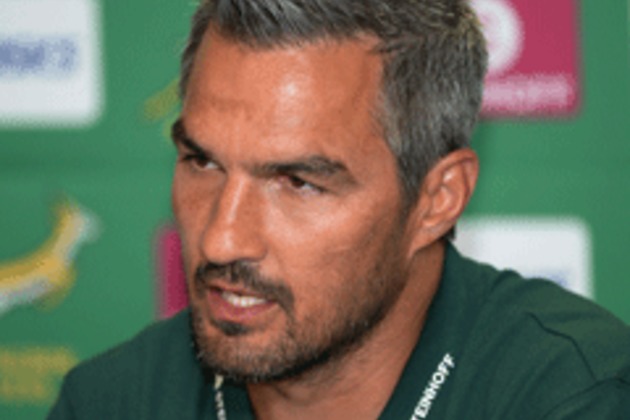 Las Vegas - The Blitzboks will have to show all their skill, courage and pride for the jersey if they want to trump hosts, USA, in the semi-finals of the Las Vegas Sevens and book a fifth consecutive final in the World Sevens Series.

This is the view of Springbok Sevens coach, Neil Powell, after the Blitzboks confirmed a top four spot for the fifth time in as many tournaments by beating Australia 17-14 in the Sam Boyd Stadium in Las Vegas earlier on Sunday.

They now face USA, who earlier dumped out Argentina, while Fiji and New Zealand will contest the other semi-final.

"This will be a massive match for us as the USA will be pumped by the big crowd and their desire to win their first home tournament," said Powell on the showdown that kicks off at 23:44 (SA time) on Sunday.

"The USA team is packed with game breakers and with the support from the locals will be a tough opponent. We did not come here to lose though, so will have to be at our best for that one if we want to play in the final later," Powell said.

The Blitzboks made it into the final four of the series for a fifth consecutive time, courtesy of a hard-fought win over Australia in the Cup quarter-finals and Powell praised his team's composure in the final minutes.

"It was a nervous last couple of minutes, but I am very proud of the way the guys responded when under severe pressure. The Aussies were very determined and motivated to get the result and for us to defend our line and the result in those last minutes made me a happy coach."

A late try by Rosko Specman, his fourth in the tournament, edged his team into the lead and determined defence by the Blitzboks in the final minutes of the match secured the win.

Blitzboks captain, Philip Snyman, acknowledged the effort from their opponents.

"We knew this was going to be a hard one, Australia are a class team and they gave it their all," said Snyman, who has made 15 tackles, the most for his team so far.

The captain admitted that they were forced into making unnecessary mistakes and did not play a faultless game.

"We gave away a lot of penalties and that kept them in the game, but we got our composure back when it mattered and our defence kept them out when they needed the winning score," a delighted Snyman said.

"When you give away so many penalties, you lose control of the game, so that is something we need to address before we face the USA in the semi-finals. Our discipline will have to be much better, come that match."

Australia scored in the opening minute at the Sam Boyd Stadium when the Blitzboks defence did not react fast enough to a quick tap penalty from the Aussies. To add to their woes, playmaker Justin Geduld then rolled his ankle and was helped off the field and replaced by Cecil Afrika.

The South African attack stepped up and Ruhan Nel scored just before the break to close the margin to two points. They also started strongest in the second half.

Siviwe Soyizwapi ripped a ball from a tackle to spark a counter-attack and was on hand to finish off the move as well. His try and the conversion by Afrika put them into the lead with five minutes to play.

Australia struck back in a dramatic match and a converted try saw them jump back into the lead with two minutes to play.

Specman then raced down the touchline to score and put his side in the lead again, with some solid defence by South Africa keeping Australia away from the tryline and into the semi-finals.

Earlier in the day, the Blitzboks maintained their winning streak in their final pool A match by defeating Wales 21-7.

Chris Dry scored early in the first half and South Africa enjoyed a 7-0 lead at the break. Two more tries by Cecil Afrika and Siviwe Soyizwapi sealed the win, although Wales scored at the end of play.

- South Africa and USA have played 43 times, with the Blitzboks winning 38 matches, with an average winning margin of 25-8. The last match between the sides was in Sydney last month, when South Africa won 21-10 in the Cup quarter-finals.

- A call on the fitness of Geduld, who has scored 20 points already in the tournament, will be made before the start of play on Day 3.