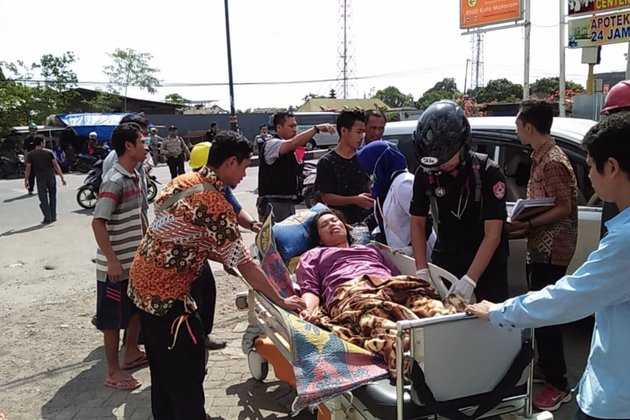 GENEVA - The International Federation of Red Cross and Red Crescent Societies is appealing for nine million dollars to provide emergency aid to some 80,000 survivors of two devastating earthquakes that have flattened large swathes of Indonesia's picturesque tourist island of Lombok. The death toll from Sunday's quake now stands at 347, according to Indonesia's Antara news agency, as a smaller quake hit Lombok Thursday.

Red Cross teams are still assessing the extent of the damage caused by the magnitude 6.9 earthquake. Sunday's quake, which followed a smaller one July 29 has caused widespread devastation, affecting an estimated 600,000 people.

The Red Cross describes the damage in north Lombok as exceptionally destructive, with 75 percent of the buildings in some villages damaged or turned into rubble.

Red Cross Federation spokesman Matthew Cochrane said some of the more remote areas of the island are cut off and have not yet been visited. He said it will take many days for the full Impact of the disaster to emerge.

Rescuers carry the body of an earthquake victim recovered from debris of a collapsed mosque in Lombok, Indonesia, Aug. 7, 2018.

"One of the interesting things coming in from our teams is the psychological toll of the earthquake. Teams speak of coming across ghost towns, of villages that have been essentially abandoned. People have left their homes. They are fearful of living, of staying inside or perhaps fearful of another major earthquake and a possible tsunami."

Cochrane said these emotional scars and the concerns of the remote communities will have to be addressed in addition to providing survivors with emergency shelter and other basic relief.

The Red Cross reports some of the thousands of families forced to flee their homes are staying in evacuation centers or in makeshift camps in open areas. The agency says its appeal will provide emergency shelter supplies, as well as materials for repairing and rebuilding damaged houses.

Over the coming 18 months, the Red Cross says its emergency operation will focus on creating livelihood opportunities for the survivors. It also will provide health, water and sanitation, protection and information on disaster risk reduction.