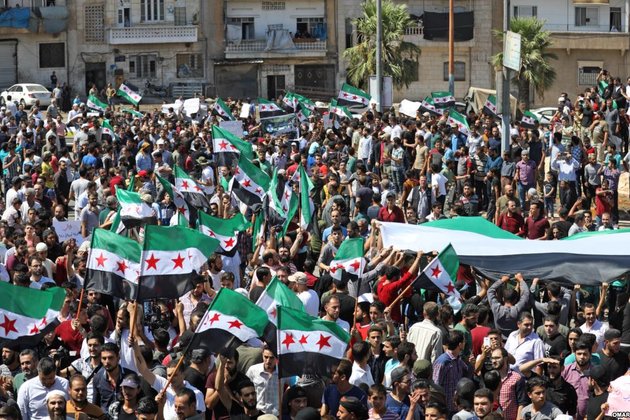 The Syrian Observatory for Human Rights monitoring group said on September 8 that the attacks were the 'most violent' raids since the government of Syrian President Bashar al-Assad threatened to attack the area a month ago.

The group said nearly 60 Russian air raids hit the province over the course of three hours early in the day.

Syrian helicopters reportedly dropped 'barrel bombs' - metal containers filled with explosives - on homes in the outskirts of the city of Khan Sheikhoun.

The attacks come one day after the presidents of Iran, Russia, and Turkey failed to reach an agreement to forestall an attack on Idlib.

On September 7, thousands of civilians took to the streets in cities across the province to protest the expected assault.

The UN Security Council met to discuss Idlib late on September 7 at the request of the United States, with the UN's Syria envoy Staffan de Mistura saying there are 'all the ingredients for a perfect storm' in Idlib.

'The dangers are profound that any battle for Idlib could be, would be, a horrific and bloody battle,' de Mistura said.

The U.S. ambassador to the UN, Nikki Haley, warned the Syrian government and its allies against an assault in Idlib, vowing that 'the consequences will be dire.'

'We urge Russia to consider its options carefully,' Haley said, calling the approach Moscow has taken in Syria a 'playbook of death.'

For Russia, Iran, and the Syrian government, retaking Idlib is crucial to completing what they seek: a military victory in Syria's civil war, which has killed more than 400,000 people and displaced millions.

Syrian troops in the last year have recaptured nearly all other major towns and cities in the country, largely defeating the rebellion against Assad that began in 2011.

With reporting by Reuters, AFP, and AP