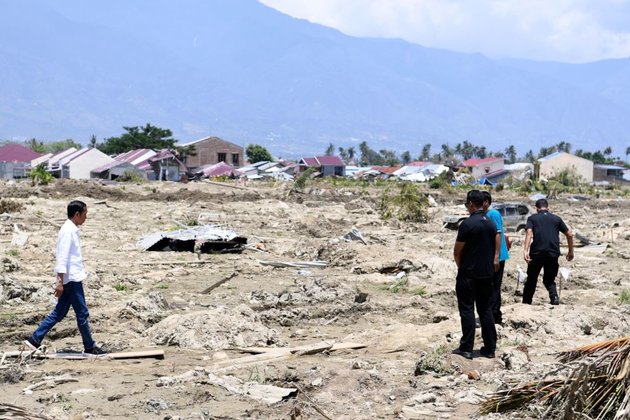 Emergency supplies are slowly trickling in to the central Indonesian island of Sulawesi, which was devastated Friday by an earthquake and tsunami that killed more than 1,400 people.

President Joko Widodo visited emergency workers Wednesday in the hard-hit city of Palu, his second trip to the island since last Friday's disaster. Residents angry over the government's slow response to the crisis have been looting abandoned stores in a desperate search for food, clean water and other supplies. Widodo has authorized the acceptance of international help for Sulawesi.

Security Minister Wiranto, who has been tapped by the president to coordinate assistance to the victims under the authority of Vice President Jusuf Kalla, announced during an emergency meeting Tuesday that he has received air transport assistance from other countries.

Residents react as rescuers recover the body of a tsunami victim in a village heavily damaged by Friday's tsunami in Palu, Central Sulawesi, Indonesia Indonesia, Oct. 3, 2018.

The 7.5-magnitude quake triggered a huge tsunami that turned scores of houses and buildings in Palu into huge mounds of debris and washed away the island's roads and bridges, cutting off at least three districts near Palu with a combined population of over one million people.

Indonesia's national disaster agency has upped the official death toll to 1,407, with 70,000 others displaced. The agency was also keeping an eye on Sulawesi's Mount Soputan, located several hundred kilometers northeast of Palu, which erupted early Wednesday, sending a huge plume of volcanic ash into the sky. There have been no early reports of casualties or damage from the eruption.

Indonesia and its 18,000 islands are located along the Pacific Ocean's 'Ring of Fire' and are frequently struck by earthquake, volcano and tsunami activity.

A 9.1-magnitude quake in 2004 off Sumatra and subsequent tsunami killed about 230,000 people in 14 Pacific countries, with about half of those deaths occurring in Indonesia.