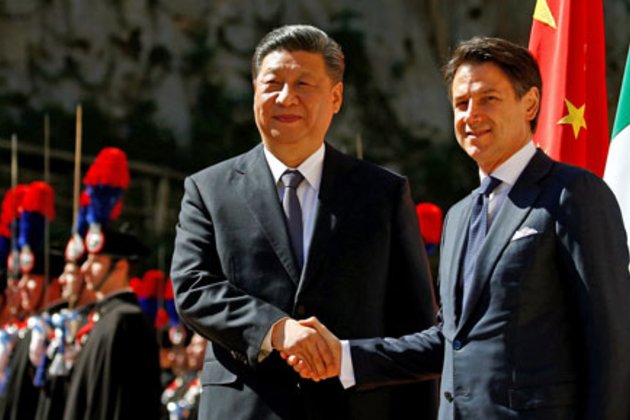 After soaring and then plunging over the past several years, China's outbound investment has gone flat, raising doubts about the success of President Xi Jinping's signature trade expansion plan.

On the eve of Xi's recent trip to Europe, the Ministry of Commerce reported that China's non-financial outbound direct investment (ODI) remained "stable" in the first two months of this year, the official Xinhua news agency said.

The report on March 21 said that ODI had reached U.S. $15.66 billion (105 billion yuan) in the January-February period, without saying whether investment rose or fell.

But a check of past ministry reports found that ODI dropped 6.9 percent from a year earlier, when growth was relatively strong. During the first two months of 2018, investment climbed 25.2 percent from the comparable 2017 period to U.S. $16.82 billion.

The decline of ODI this year has posed an apparent contradiction to the image of robust investment growth that China has been projecting abroad with the promotion of Xi's trillion-dollar Belt and Road Initiative (BRI).

So far, the government has offered no explanation of why China's outbound investment is falling when BRI investment is supposed to be growing by leaps and bounds.

The ups and downs of the ODI figures have followed a series of policy shifts and capital crackdowns over the past three years.

The outflows turned China into a capital exporter, prompting the government to ban "irrational outbound investment" in most of those sectors as China's foreign exchange reserves dipped below U.S. $3 trillion for the first time since 2011. As a result, ODI slid 29.4 percent in 2017.

Thanks to regulatory easing and a low year-earlier base, ODI rebounded at double-digit rates in the first seven months of 2018 before starting to fade again. For the full year, non-financial ODI rose by a scant 0.3 percent to U.S. $120.5 billion, down nearly 30 percent from the 2016 peak.

The continuing slippage in 2019 is a bit of a puzzle, particularly since the government has been trumpeting BRI so loudly overseas.

The BRI push to build global infrastructure to spread Chinese trade and influence throughout the world should be pumping up ODI to new highs, but instead outbound investment has been diving into another slump.

"And we can't replicate that figure. Ours is lower," said Derek Scissors, a resident scholar at the American Enterprise Institute in Washington, who compiles the China Global Investment Tracker to chart ODI.

"They keep talking about curbing irrational investment, but that happened more than a year ago," Scissors said.

"Starting in the fourth quarter of 2018, there's just been no spending," he said. "It may be lack of foreign exchange as they worry about the balance of payments, or it may be lack of willing partners in the United States and Europe due to tighter regulatory oversight."

Whatever the reason, the dismal ODI figures may cast doubt on perceptions that BRI is an extension of China's overflowing investment growth. But at the least, the downturn helps to explain Xinhua's reluctance to report the year-earlier comparison on the day that Xi began his European foray into Italy, France, and Monaco.

The partial reporting is also an example of the increasing manipulation of data in official media that has taken place during China's economic downturn in recent months.

In the two-month report, China's investment in BRI countries alone is quoted as rising 7 percent from a year earlier to U.S. $2.3 billion, which would be 14.6 percent of China's ODI. But the growth rate is questionable since it cites investment in only 48 participating countries.

The ministry report from a year earlier does not specify how many BRI countries it covers, but the full-year report for 2018 cites 56 countries, making the comparison uncertain.

A report in the official English-language China Daily on March 20 referred to BRI cooperation agreements with 123 countries.

"BRI has never been important for aggregate investment, but it's at least been growing from a small base. Now, they can't even find growth without massaging the figures," Scissors said.

According to the ministry's reporting, non-financial ODI in BRI countries in 2018 rose 8.9 percent from a year earlier to U.S. $15.64 billion, accounting for 13 percent of China's total last year.

Despite the advance publicity over the spread of BRI during Xi's visit to Europe, the actual gains appear to be modest.

Early reports from Italy focused on a non-binding memorandum of understanding to join BRI that could increase Chinese access to four Italian ports including Trieste and Genoa.

Reuters reported that only 10 deals were with companies, while the others were with ministries and public bodies.

Many of these were preliminary agreements on cooperation rather than contracts.

But the big trade deals with France may have masked President Emmanuel Macron's opposition to China's BRI inroads, investment and influence in the European Union.

In the days before Xi's visit, Macron was quoted as saying that China "took advantage of our divisions," and called China's investment in European ports a "strategic error."

"The period of European naivety is over," Macron told reporters, according to Reuters.

China's BRI accord with Italy sparked discord with other EU members, prompting calls for a common policy to prevent Chinese control of strategic assets and infrastructure.

"The expansion of transport links between Europe and Asia is a good thing, as long as the autonomy and sovereignty of Europe is not endangered," Oettinger said.

The BRI push and instances of heavy debt burdens from big projects has threatened to ignite other issues with China, slowing the pace of its foreign investment.

"And if some countries believe they can do clever business with the Chinese, then they will be surprised when they wake up and find themselves dependent," said German Foreign Minister Heiko Maas. "China is not a liberal democracy," Maas warned.

After Xi's meetings with German Chancellor Angela Merkel and European Commission President Jean-Claude Juncker, EU leaders put their objections to BRI in diplomatic terms as they pressed for equal access to the Chinese market.

"We, as Europeans, want to play an active part," Merkel said, according to Reuters. "That must lead to a certain reciprocity, and we are still wrangling over that a bit."

The pushback may help to explain why China's outbound investment has been dropping at a time when it was expected to make historic strides.

But the image of limitless finances that China has been peddling in overseas markets is also at odds with the country's declining economic growth rates at home.

It is unclear whether China sees BRI as a remedy for its economy or whether it will become a burden on its finances, but so far this year, China's outbound investment is not what it seems to be abroad.