100 Million in Path of Major Cyclone Headed for India 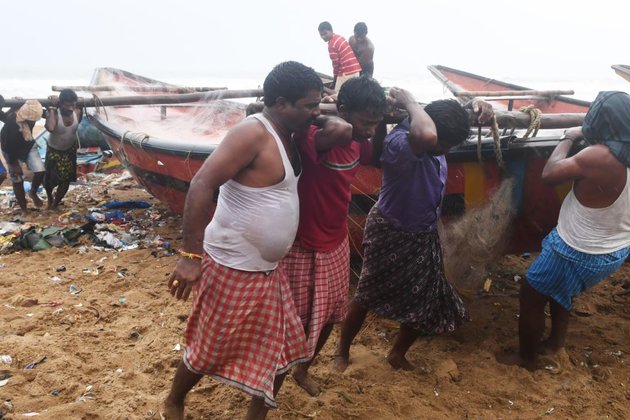 More than 100 million people are in the path of Cyclone Fani as it slowly moves toward the eastern Indian state of Odisha.

Indian authorities have evacuated more than 1.2 million people from the coastal, low-lying areas and plan to move thousands more before the cyclone makes landfall early Friday.

'We are maximizing efforts at all levels for evacuation,' Odisha's Special Relief Commissioner Bishnupada Sethi said.

As of early Thursday, the storm was churning in the Bay of Bengal with maximum sustained winds of 250 kilometers per hour and gusts of up to 305 kph.

Fani has intensified significantly over the past couple of days, prompting the India Meteorological Department to refer to it as an 'extremely severe cyclonic storm.'

Cyclone tracker Tropical Storm Risk rated Fani as a category 4 storm, a notch below the worst level. Red warnings, the highest level, have been issued for extremely heavy rainfall and dangerous sea conditions Friday in Odisha and Saturday in West Bengal.

Officials also are asking tourists to leave the coastal city of Puri, home of the 13th-century Konarak Temple, a UNESCO World Heritage Site, and the Jagganath Temple, one of the most holy in Hinduism.

Two major eastern ports, Paradip and Visakhapatnam, have been ordered to move ships out to sea to avoid damage. Flights have been canceled from midnight Thursday at the airport in Odisha's capital, Bhubaneshwar, and for Kolkata Airport from 9:30 p.m. Friday, according to India's Ministry of Civil Aviation.

Communities away from the coast also are on alert for heavy flooding. Rainfall of 20 to 25 centimeters is expected over a widespread area.

Eastern India is no stranger to deadly storms. In 1999, a supercyclone hit Odisha, killing more than 10,000 people. Four years later, the toll was significantly lower when Cyclone Phailin hit the state.

Because of improved forecasting and evacuation, more than 1.3 million people were moved out of harm's way, resulting in a few dozen deaths, rather than thousands.

On Tuesday, Fani became the strongest storm in the north Indian Ocean this early in the season, passing Cyclone Nargis, which killed more than 100,000 people in Myanmar in 2008.

The north Indian Ocean cyclone season doesn't have a defined start and end like the Atlantic hurricane season. Instead, it has two main periods of activity: late April to early June, and October to November.

Fani is the first cyclone of the 2019 season.