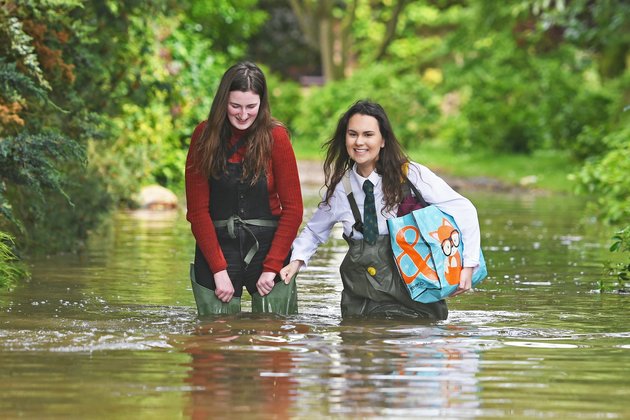 The British town of Wainfleet in Lincolnshire is underwater. After two months rain in two days, the River Steeping burst its banks, and 580 homes were evacuated. Curiously, the advice to the town's remaining residents is to avoid flushing the toilet or using the washing machine whenever possible - advice that is more usually associated with drought rather than flood.

The request suggests that Wainfleet's sewer system is dangerously close to capacity. Using the loo and washing machine not only puts a demand on the water supply system, but it also adds to the flows in the local sewer, which is likely to be very full.

Like most towns in Europe, Wainfleet's town centre was constructed before the 1950s, and will be served by a "combined sewer" that takes both the waste water from toilets and showers, and the rainwater from roofs and roads. This resulting dilute waste water then needs to be treated before it is discharged into the environment. If the volume of water is too much for the treatment plant to handle then a "combined sewage overflow" will release dilute sewage into rivers and oceans. It is because of combined sewage overflows that it's not a good idea to bathe in rivers or beaches after there has been rainfall.

An additional problem in Wainfleet (and many low-lying areas like London, much of the Netherlands or New Orleans in the US) is that the sewer system is lower than the level of the river or sea. This means that the wastewater/rainwater combination does not just need treatment, but it also needs pumping. If there is too much water for the treatment works or pumps to process at any one moment, then water from streets or homes will be unable to enter the sewer system, and dirty water, including dilute sewage, can overflow into rivers, streets and homes.

A dramatic example of this happened in Hull in 2007. Just like in Wainfleet, heavy summer rainstorms put pressure on treatment systems and pumps. More than 8,000 homes were flooded, and some people were out of their homes for over a year. Such flooding causes huge physical disruption and challenges people's mental health. Imagine unexpectedly losing most of your possessions, simultaneously needing to find a new place to live for an unpredictable length of time, having to manage the family routines from a different location, and meanwhile having to negotiate with insurers and builders about the renewal of your home.

As climate change threatens to bring more sudden rainstorms, many places are becoming more vulnerable to problems like those in Wainfleet and Hull. One way to address these problems is to slow down the flow of rainwater. The hard surfaces of roads, pavements and pipes, for example, speed up the flow of water. Some agricultural drainage practices may also encourage water to flow rather than waterlog the land. What this all means is that all the water from the rainstorm arrives at the treatment and pumping facilities at the same time.

We can address these problems - in Wainfleet as elsewhere - but it will take many small changes to the way people manage their water.

All over the world, local authorities are exploring how they can repurpose parks and other open spaces to help to store the water from heavy rainfall. In Firs Farm Park in the London borough of Enfield, for example, playing fields have been raised and others transformed into wetland to hold back the water and prevent flooding downstream. This work has helped to stimulate the involvement of local people in maintaining the park, while the wetlands provide a nature resource for schoolchildren.

Similar projects are being explore as far apart as Bergen, Norway, and Belo Horizonte, Brazil.

On a smaller scale, water can be held back in street rain gardens. These small patches of planting combined with dropped kerbs offer opportunities for infiltrating water and greening the streets. Residents may have to sacrifice some local parking spaces, but such investments can make a neighbourhood more pleasant for everyone, as well as reducing the flows downstream.

The request to minimise household inputs to the sewer system is one small immediate way to mobilise local residents to help address the threat of flooding. But residents with a garden can help in other ways too. Most UK houses have gutters that discharge directly to the sewer. Depending on the local geology, garden soakaways (stone-filled ditches which can soak up water if it rains), retain the water so it drains more slowly to the ground or the sewer.

Another way to accomplish this task is with a raintank. Most people think of raintanks (or water butts) as a way to protect against droughts. But as long as a tank has some space in it, it also has the potential to provide added protection for a neighbourhood from flooding. My research team is currently exploring whether we can make "leaky raintanks". The idea here is that as well as storing water for use in the garden, the tank will also have a space which is able to fill up in a storm and then drain slowly into the sewer. If every household in a neighbourhood had a "leaky raintank", it could make a significant difference to the amount of water storage during a storm.

Whether helping to replan the local park, participating in discussing which parts of the street can form a rain garden, or through managing a soakaway or raintank on your private land, water management is increasingly seen as something which is too big and too important to leave just to technical experts. We are all part of the water system, and those that manage water are recognising that people are able and willing to undertake actions to improve the water system.

Meanwhile, technical experts more widely need to recognise that water is part of lived in and natural landscapes - and this must be reflected in sewers and streets. In a time in which water-related threats are worsening, society needs to look beyond isolated problems of floods or droughts, and to consider how wise water management can deliver local benefits as well as a more resilient landscape for everyone.