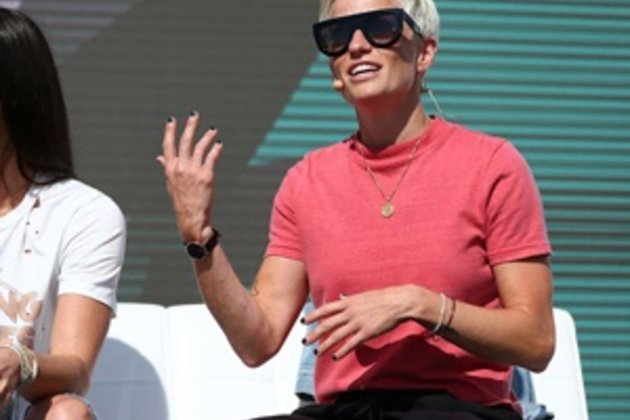 Paris - As the eight survivors caught their breaths, nursed their injuries and prepared for their quarter-finals, the headlines at the women's World Cup on Wednesday were dominated by a man who is not playing or even in France.

As his national team prepared for a quarter-final with hosts France, United States President Donald Trump responded to USA star Megan Rapinoe's latest assertion that she would not visit the White House by accusing her of "disrespect".

Rapinoe had repeated her unwillingness to meet Trump in a video released earlier in the day.

That provoked another of Trump's public feuds with high-profile athletes and celebrities.

The US President sent multiple tweets complaining about Rapinoe, whose short, dyed hair has made her one of the most recognisable faces of the mighty US team.

The reigning world champions meet France on Friday for a match US co-captain Rapinoe says she hopes will be "wild and crazy".

Heath played alongside Henry at US club Portland Thorns in the 2016-2017 season and the experience left a lasting impression.

"She's fantastic, I consider her one of the best players in the world," Heath said in a press conference.

"She has this competitiveness that is really what I am used to. She is a natural leader and they are lucky to have her as their captain."

Heath was less happy about the unprecedented European presence in the last eight.

Holders the United States are the last ones standing in the way of a European winner. There had never previously been more than five European teams in the last eight at the tournament since its inauguration in 1991.

"As a football fan, to me I would want a little bit more diversity at this point. I find European football sometimes a little boring," said Heath.

That domination is not to every European's liking. The World Cup serves to select the three European teams in the 2020 Olympics.

"Even the semi-final may not be enough now, if four European teams get there," said Martina Voss-Tecklenburg, coach of Olympic champions Germany.

Meanwhile VAR and refereeing were again a topic on Wednesday, as Pierluigi Collina, the head of refereeing at FIFA, spoke to a media briefing.

Collina answered accusations that FIFA was using the World Cup as a testing ground for new rules, by saying that changes always came in June before major tournaments. He said that most had been a success.

"The only issue concerns penalty kicks, and honestly we have been a bit surprised," Collina said.

The problem, he acknowledged, was not the slight loosening of the law, to allow goalkeepers to take one step off the line, but the use of the video assistant referee to spot when they cheated and they had, Collina argued, been cheating a lot.

"The law always existed but was not respected or enforced," the Italian said.

"Today in matches with VAR, if the tool makes it possible to see something, we cannot ignore (it)," he said.

"If we have a tool that can show clearly that there is an offside position, it doesn't matter if it's two centimetres or 20 metres. There is not a small or a big offside."

Late in the day FIFA announced disciplinary proceedings against Cameroon for misconduct and offensive behaviour in their combustible 3-0 last 16 loss to England.