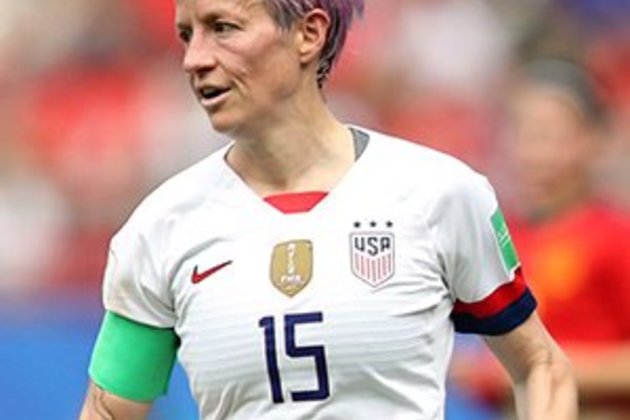 Paris - Fearless and ferocious, Megan Rapinoe finds herself facing battles on and off the field as US co-captain at the women's Soccer World Cup.

Rapinoe showed she is the United States' go-to-woman as she scored the goals that put the holders in the quarter-finals where they face a mouthwatering clash with France on Friday.

As she prepared on Wednesday for the biggest match of the tournament - perhaps the biggest ever in women's football - she found herself facing unfriendly, but not unexpected, fire from her own president.

In a series of tweets, Donald Trump accused Rapinoe, one of the most recognisable faces of the US team, of "disrespect" after the broadcast of a video clip in which Rapinoe dismissed the idea of visiting the White House if the US team win the World Cup.

"I'm not going to the fucking White House," Rapinoe said in the clip on Eight by Eight, a football magazine, repeating a point she had made before.

This time, President Trump responded, wading into the latest of his public feuds with high-profile athletes and celebrities.

The 33-year-old Rapinoe's ice-cold execution of two penalty kicks gave the USA a hard-fought 2-1 victory over Spain in the last 16 in Reims.

Attacking midfielder Rapinoe, who has 156 caps and 47 international goals, is one of the four co-captains alongside Carli Lloyd, Becky Sauerbrunn and Alex Morgan.

Lloyd has largely been used as a replacement for Morgan, who was not at her best against Spain and may still be carrying a knock, while Sauerbrunn's basic error led to Spain's equaliser, two minutes after Rapinoe gave the USA an early lead.

"She'll never have to buy another drink in her life because she bailed me out and she bailed the team out," said Sauerbrunn after Monday's win.

It looks as though Rapinoe could get her wish for a "total shit-show circus" at the Parc des Princes. Tickets for the match are priced in the hundreds of euros on resale website Stubhub.

The French women, replete with the stars of Lyon, Europe's finest club side, are seeking their first ever World Cup and that means ending the USA's supremacy.

"I think this is the game that everyone had circled, It's going to be a great match," said Rapinoe.

For Rapinoe, the circus this week has also been off the field.

She had long signalled her unwillingness to visit the White House.

In 2012, she came out as gay shortly before playing a key role in the US women's gold medal-win at the London Olympics. She has since fought for LGBT rights.

There were calls for her to be dumped by the national team after she supported NFL quarterback Colin Kaepernick's 2016 protests by kneeling in solidarity during the national anthem.

She is one of the leaders of the US women's fight for pay equality, - they filed a lawsuit against the United States Soccer Federation in March accusing the organisation of gender discrimination.

"In every aspect of life, the more we can tackle the inequality from a lot a different angles, perspectives, different lanes the quicker we can rectify the problem," Rapinoe has said.

Her willingness to stand up in key moments could be necessary in a feverish atmosphere in the French capital.

"I feel pretty good when she's on penalties," said Rose Lavelle, who won the controversial second spot-kick against Spain.