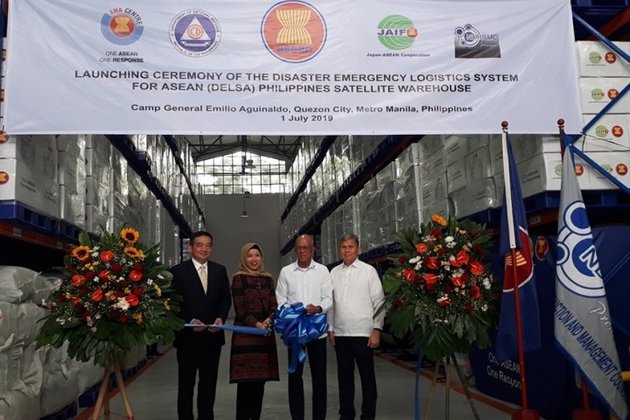 This was the collective message highlighted during Monday's launch of the newest Association of Southeast Asian Nations (ASEAN) Emergency Satellite Warehouse at the Armed Forces of the Philippines General Headquarters in Camp Aguinaldo, which also coincided with the kickoff of the National Disaster Resilience Month this July.

"We are pleased that this DELSA (Disaster Emergency Logistics System for ASEAN) warehouse is now ready for operation today. This satellite warehouse is another enduring pillar that will support our declaration of 'One ASEAN. One Response' enabling us to heighten our emergency preparedness and increase our response capacity as a member state and together with the ASEAN members will respond to both large scale and medium scale disasters within and outside the ASEAN region," concurrent National Disaster Risk Reduction and Management Council (NDRMC) executive director, Office of Civil Defense (OCD) administrator, and DELSA warehouse co-manager Ricardo Jalad said during the unveiling.

The strategically located satellite warehouse forms part of the DELSA network of warehouses across the region that will increase the speed and scale of disaster response and supplement the existing regional stockpile managed by the World Food Programme at the United Nations Humanitarian Response Depot in Subang, Malaysia.

"This warehouse is the brainchild of one major ASEAN realization born from past calamities experienced in the region. This underscores the importance of stockpiling goods and equipment that would be needed in the response phase of emergencies. This entails that the venue where such goods will be stored must be strong to withstand nature's wrath, is readily accessible for our disaster managers and responders, and allows the effective storage, as well as quick and easy pile transfer of these items to locations where they are most needed," Jalad said.

"Today's inauguration is a fitting start on the observance of the 2019 National Disaster Resilience Month, an annual observance, which promotes the countenance of efforts to transform the Philippines into a nation that is capable of withstanding and surmounting the challenges of hazards and disasters," he added.

The event also marks the strengthening of cooperation and commitment between the ASEAN Coordinating Centre for Humanitarian Assistance on disaster management (AHA Centre) and the Philippines to support the readiness of ASEAN in responding to disasters. The satellite warehouse is being co-managed by the AHA Centre and the NDRRMC, through the OCD and supported by the Government of Japan through the Japan-ASEAN Integration Fund (JAIF).

"With generous funding support from the Government of Japan, through JAIF, we turned our desire into reality," AHA Centre executive director Adelina Kamal, for her part said.

"In 2013, one year after the regional stockpile in Subang was established, Super Typhoon Haiyan (Yolanda) hit the Philippines. It was one of the most significant disasters that ever occurred in the ASEAN region in the past two decades. Typhoon Haiyan generated loses for the country and the ASEAN region and gave birth to the vision known as 'One ASEAN One Response'. One of the lessons learned from Typhhon Haiyan was the need for ASEAN to increase the speed, the scale, and the solidarity of ASEAN response. Based on these, we conceived the idea of separate warehouses, in addition to the regional stockpile in Subang, Malaysia, and started with the phase two of the DELSA project," Kamal added.

It can be recalled that other satellite warehouse, which was recently launched during the 34th ASEAN Summit, is located in Chainat, Thailand, a three-hour drive up north from Bangkok. (PIA InfoComm)