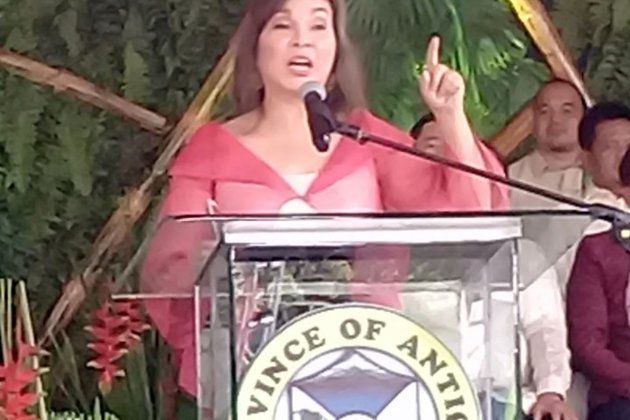 "Today, we mark the start of the Golden Age of Antique," Legarda said during the Inaugurals 2019 held at the Evelio B. Javier Freedom Park here, as she rally the support of the Antiquenos in order to help achieve her vision for the province.

She envisions the province to be progressive, united province that is inclusive, peaceful and orderly, resilient and sustainable, empowers the vulnerable, and respects its environment and heritage.

"Imagine what we can accomplish if we will unite to push our province towards its long overdue progress," Legarda said.

She took her oath of office before Punong Barangay Macario A. Bagac of Mag-aba, Pandan, Antique as proof that she will give importance to every barangay, hinterland, indigenous, mountainous, coastal, and sectors of the community.

"We will prioritize the provision of livelihood opportunities in all the 590 barangays of the province so that all Antiquenos have source of income or additional earnings," she said.

As for the fisherfolks, she vows to provide boats and fishing gears they need and the establishment of a tuna processing facility, as well as our farmers in the upland by fixing their source of water.

Aside from ensuring free education and additional allowance to students, Legarda will also address malnutrition problem in the province.

"It is unacceptable that our province is blessed with so much natural resources from the mountains and the seas, yet it is the poorest in the region. We should not allow our people to live in poverty. And so I thought it was time for me to focus on Antique. I have already served my country well and I would not want my home province to be left behind. It is not enough that there are projects or funding, I have to make sure that Antiquenos are really benefiting from government services that are available to them," Legarda said.

The solon also enumerated several of her accomplishments as then senator of the country, where she authored and sponsored several laws benefiting several sectors of the society, and as chairperson of the Senate Committee on Finance, she made sure that the national budget is one that is pro-people, supporting the national government's priority programs while also ensuring that social programs are adequately funded.

She urged everyone here to patronize the Antique - Clark International flights as she will be working to further improve the airport and strive to have more airlines fly to the province.

According to her, FastCat had its ceremonial Culasi-Caticlan voyage last May. This route will soon be available and there will also be a route from Culasi to Caluya to Mindoro and Batangas.

As an environmental advocate, she expects that the environmental laws she authored will be implemented by the provincial government and every municipality.

In order to achieve her vision for the province, she urged everyone to help each other; help the leaders; and be part of the solution.

Legarda also called on the public to embrace the virtue of "Malasakit" or "pag-ulikid" in Kinaray-a language.

"Malasakit is such a beautiful Filipino word. When you have malasakit, you think of someone or something as if it were your own. Your actions are dictated not only by the mind but also by the heart; you do things out of care and respect-malasakit sa kapwa; malasakit sa trabaho; malasakit sa kalikasan; malasakit sa Inang Bayan," she said.