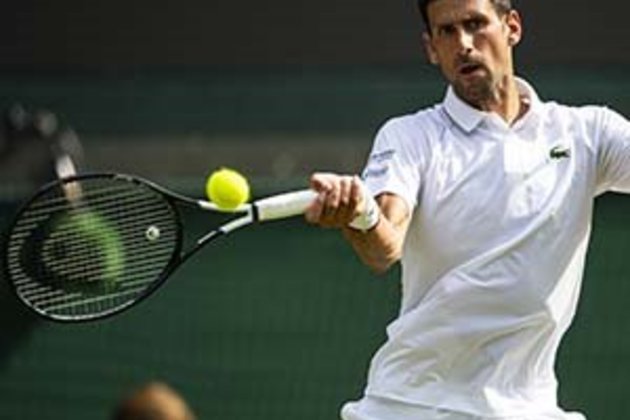 London - Playing Novak Djokovic is like facing a killer eight-legged spider that can reach everything you throw his way - so says the coach of his Wimbledon quarter-final opponent David Goffin.

The defending champion and world number one takes on Belgian 21st seed Goffin on Centre Court on Wednesday for a place in the semi-finals.

Goffin's coach Thomas Johansson said he had a game plan to drag Djokovic out of his comfort zone.

"It's almost impossible to find any weaknesses in his game," the 2002 Australian Open champion said of Djokovic.

"He doesn't have a big serve but it is very, very accurate. From the baseline he's a wall.

"I remember hitting with him many years ago; it's like hitting against a spider. It feels like everything is coming back.

"You really have to try to put him in uncomfortable positions on the court - otherwise he will kill you."

Goffin, 28, has matched his best-ever performance at the Grand Slams by reaching his first Wimbledon quarter-final.

Four-time Wimbledon champion Djokovic, 32, has a 5-1 record over Goffin - but the Belgian won their last encounter, on clay in the Monte Carlo quarter-finals in 2017.

"It's very important for David to have beaten him once. Most of the guys never have," Johansson said.

"Novak is the guy to beat here. You can talk about Rafael Nadal and Roger Federer but he is the defending champion.

Johansson, 44, has been working with Goffin on tactics to contain Djokovic, namely a much-improved slice and drawing the top seed to the net.

"We will try to find a good solution because rallying with him is not an option," the Swede said.

Goffin is only the fifth Belgian man in history to reach the Wimbledon quarter-finals - and, along with Xavier Malisse in 2002, the only one to do so since 1924.

Malisse, 38, said the odds were heavily in favour of Djokovic - but Goffin could still spring a surprise.

"It's going to be tough. Everyone knows it - including him," the former world number 19 said.

"But it's one match. If he's on good form and Djokovic is off a bit, gets a little stressed or nervous, that can change things.

Belgium's Kim Clijsters, a two-time Grand Slam champion, said her compatriot had been playing better than ever.

"He has nothing to lose. It's been a lot of fun watching him do well and seeing him being more emotionally outgoing and showing his fighting spirit."