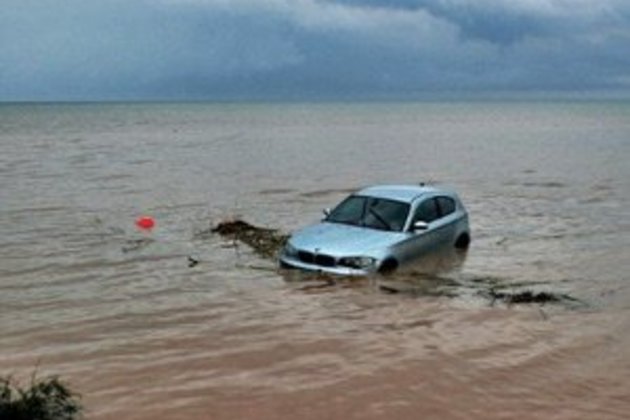 Seven people died and at least 23 were injured as a fierce storm ripped through beachfronts in one of Greece's top tourist areas, terrifying thousands of holidaymakers caught in the open, authorities said Thursday.

Six tourists including two children were killed - two each from the Czech Republic, Russia and Romania - in the northern peninsula of Halkidiki, near Greece's second city Thessaloniki, in the storm late Wednesday.

Relatives have since identified the body of a local fisherman in his 60s who had been missing since the storm and was later found in the sea.

"There was panic, people were howling and running to hide inside," said Haris Lazaridis, owner of a tavern where a 54-year-old woman from Romania and her son were killed when the roof blew off.

"For five minutes it was hellish," Lazaridis told AFP. He added that more than 100 people had been sheltering under the roof.

In an emergency briefing, government spokesman Stelios Petsas on Thursday said the area had been hit by winds of more than 100 kilometres (60 miles) an hour.

Twenty-three people were still being treated in nearby hospitals, including a 72-year-old woman in critical condition, he said.

Most of them are tourists, Petsas said, declining to give nationalities.

Prime Minister Kyriakos Mitsotakis, who took office on Sunday following a general elections, cancelled his meetings to address the disaster, his office said.

"We are making every effort to resolve problems and repair the damage," Mitsotakis said in a tweet.

The Halkikidi peninsula is particularly popular among Balkan and Russian travellers.

The freak storm lasted only about 20 minutes, according to witnesses, but it was enough to overturn cars, uproot trees and balcony railings and cause mudslides.

Road access to part of Halkidiki was still severed owing to a fallen high-voltage electricity pylon, Petsas said, adding that technicians might need two more days to restore power to the area.

In the meantime, power generators are being rushed in to meet the needs of hundreds of thousands of locals and visitors, the energy ministry said.

"It was a miracle that there weren't more deaths," said 39-year-old Kyriakos Athanasiadis, who is vacationing in the area.

"Nearly all the coastal restaurants were full, and you could see large objects flying," he told AFP.

One woman reportedly told hospital staff she was picked up by the wind and thrown into a garbage bin, which then rolled away.

On a beach in Sozopoli, the storm toppled and ripped open a Czech family's caravan, killing an elderly couple in their seventies and injuring their 48-year-old son and 19-year-old grandson.

"You cannot describe it," said Giannis Karabourniotis, owner of a nearby fish restaurant. "There used to be 50 pine trees around my establishment. Most were uprooted or snapped in two," he said.

The wind picked up the caravan "as if it were a matchbox," he said.

Elsewhere in the region, a Russian man and his son were killed by a falling tree.

"It was an unprecedented phenomenon," said Charalambos Steriadis, head of civil protection in northern Greece.

Officials have declared a state of emergency and army crews were working around the clock to restore electricity.

"I want to express my sorrow on behalf of all... We mourn for the loss of these souls," said Citizen Protection Minister Michalis Chrisochoidis, who is overseeing operations in the area.

"We are in solidarity with their relatives, with the people who have lost their families," he said.

The storms came after temperatures in Greece soared to 37 degrees Celsius over the past two days.

The Greek national observatory said it had recorded more than 5 000 lightning bolts around the country on Wednesday evening.