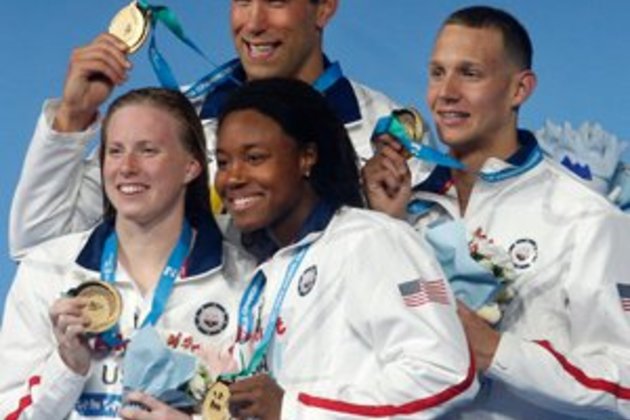 Gwangju - When Simone Manuel was growing up, people laughed at her for wanting to become a swimmer, telling her to take up basketball or track and field instead.

Now an Olympic and world champion, the 22-year-old American is embracing her status as a trailblazer and role model for black athletes and African-American children who face similar racial stereo-typing.

"People told me I couldn't be a swimmer, that I should've been in a different sport," she told AFP in an interview on Friday before the start of the world swimming championships in South Korea.

"I've had people laugh at me," added Manuel, who bagged gold in the women's 100m freestyle at the 2016 Rio Olympics and at the last world championships in Budapest two years ago.

"I didn't feel like I belonged. That was really difficult growing up because when people question something that you're passionate about, you start to doubt yourself," said the Texan.

"Society is saying 'this is the blueprint for what an African-American woman should be good at'. I feel like my story has defied barriers. Being a role model is a privilege, but it's also a responsibility."

Manuel became the first African-American woman to win an individual Olympic swimming gold medal when she tied Canada's Penny Oleksiak for gold in Rio, joining athletes she idolised in making sporting history, such as tennis sisters Venus and Serena Williams.

"I looked up to Venus and Serena - I was so inspired by them," said Manuel.

"There are racial stereotypes in every aspect of life - whether it's academics, sports, the music industry. That's why it's super important to me to inspire people to dream big, to go after swimming and not feel as if they have to fit inside a specific box. Hopefully it will diversify the sport."

Manuel also paid tribute to the US women's football team, who took a unified stand on equal pay on their way to retaining the World Cup earlier this month.

"I definitely think all of us were inspired by their performance and what they stand for," she said.

"They stand for equality. Sport is an opportunity for us to use our platform to talk about things that are important to us and that we're passionate about."

In the pool, Manuel will have her hands full defending her world title in the 100m freestyle with Sweden's world record holder Sarah Sjostrom and Australian Cate Campbell clocking faster times in the run-up to the competition, which begins on Sunday.

"Ranking coming into the meet doesn't really matter," insisted Manuel, who is an ambassador of Korean electronic giant Samsung.

"If you talk about Rio - coming in, people didn't expect me to win," she added.

"If you talk about Budapest in 2017, people didn't expect me to win.

"Everyone swimming the 100m freestyle is a threat. It's definitely about touching the wall first. I have lofty goals for this meet and I know what I'm capable of doing - I'm just ready to race."