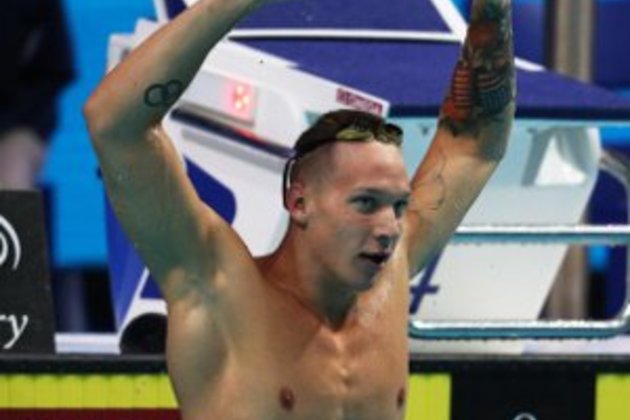 Gwangju - Britain's Adam Peaty completed a world treble in the men's 100 metres breaststroke on Monday, while American Caeleb Dressel continued to feed his obsession for gold by romping to the 50m butterfly title.

Peaty completed what was deemed a formality after smashing his own breaststroke world record at the weekend in Gwangju, South Korea, clocking 57.14 seconds to win gold - although his forlorn expression on seeing his time told its own story.

"A little bit disappointed, but that will fuel me for next year," said the Briton, who set a new world mark of 56.88 at the weekend, becoming the first swimmer to break 57 seconds.

The 24-year-old puffed out his cheeks and shook his head despite becoming the first male swimmer to capture three 100m breaststroke world titles.

Unbeaten in five years over the distance in major competitions, Peaty turned inside world record pace but ran out of steam. Behind him, fellow Briton James Wilby took silver in 58.46 and China's Yan Zibei bronze in 58.63.

"At the Olympics next year I've got to be more patient instead of going crazy in the semi-finals," said Peaty.

"I need to hold back the guns and let go in the final."

Dressel, one of the few swimmers with more body ink than Peaty, swept to seven gold medals at the 2017 world championships in Budapest - 10 years after American great Michael Phelps became the first to do it.

It gave him a second gold medal of the week after leading off the American 4x100m freestyle victory on day one.

"I went for a walk, read a book, watched videos of cars. But I'm in a better place than two years ago. If I try to be fast then I'm no good, so it's better just to shut everything off and let instinct take over."

Sjostrom was looking to become the first female swimmer to win five gold medals in a single individual event, and the Olympic champion turned first - and five hundredths inside her own world record.

But MacNeil came roaring back over the last 25m to claim her first world title, touching in 55.83 with Sjostrom second in 56.22 and Australia's Emma McKeon third.

"I've looked up to Sarah forever so it means the world."

At the medal ceremony, the swimmers sent a message of support to Japanese rival Rikako Ikee, who was diagnosed with leukaemia earlier this year.

The trio wrote "Never give up, Rikako Ikee" and hearts on their hands, which they held up to photographers in a touching show of solidarity.

Hungary's "iron lady" Katinka Hosszu sped to her fourth world title in the women's 200m individual medley, her time of 2:07.53 more than a second faster the silver medallist Ye Shiwen of China.

"I just heard it hadn't been before," said Hosszu.