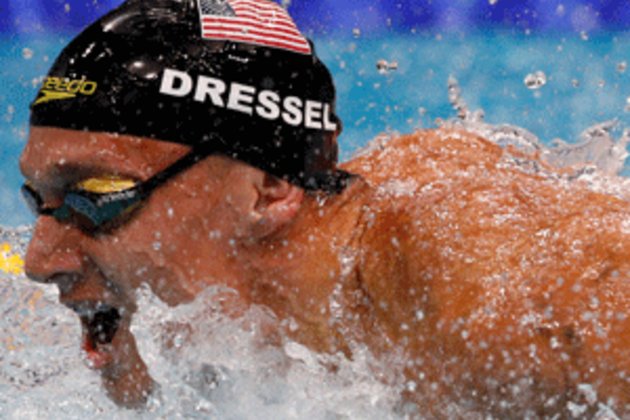 The lightning-fast performances helped refocus attention on the pool after a week dominated by protests directed at China's Sun, the triple Olympic champion who is accused of destroying blood samples after a visit from drug testers.

China's head coach Zhou Jijong called the actions against Sun, when Australia's Mack Horton and Briton Duncan Scott both snubbed him on the podium, "harmful" and "prejudiced".

"It is unbelievable and unacceptable that some people publicly defiled the innocence of an elite athlete based on speculation and hearsay," Zhou told Chinese media.

In the day's highlight race, Dressel exploded from the blocks to lead by a body-length at the turn and finished strong as he bagged his third gold of the week.

"It hurt, it hurt really bad to be honest," winced the tattooed American. "You don't get that magical feeling every night - you've just got to shut the brain off and go."

Dressel, who racked up seven world titles in Budapest two years ago, high-fived his Aussie rival Chalmers before perching himself on a lane rope to milk the crowd's applause, raising a fist to flag-waving American fans.

"I gave it my all tonight," said Chalmers. "But I saw Caeleb did 46.9 - which is absolutely mind-blowing."

Elsewhere, Daiya Seto captured Japan's first gold medal of the competition by sweeping to victory in the men's 200m individual medley in 1:56.14.

Seto, twice a 400m medley gold medallist, refused to buckle under pressure as he held off Switzerland's Jeremy Desplanches to win by just under half-a-second, with defending champion Chase Kalisz taking bronze.

"It's beyond my wildest beliefs," said Wilson. "It's given me a world of confidence."

Boglarka Kapas made it a Hungarian double in the 200m fly as she stormed to women's gold in 2:06.78 from American Hali Flickinger, 24 hours after countryman Kristof Milak pulverised Michael Phelps's 10-year-old world record.

American great Katie Ledecky returned to the pool after pulling out of her 1 500m title defence and the 200m free heats earlier in the week, producing a strong second leg in the women's 4x200m free.

Ledecky revealed a late-night text from Olympic legend Phelps had helped pep her up after she went down with a flu bug.

"He texted me and was kind of just like, 'What's up, are you okay?' - That meant a lot," she said. "I got that text in the middle of the night when I was having one of those sleepless nights. That gave me a little bit."

But the Aussies clung on, as Emma McKeon anchored the green and gold to a third relay title of the week in a world-record 7:41.50 with the United States also ducking under China's old mark.

McKeon said: "I was hurting but when it comes to a relay you give it your all."

"I was definitely up pinging a little bit last night," Campbell told .

"Tonight was all about conserving energy - I just knew I had to stick with Sarah and if I did then I would qualify no worries."