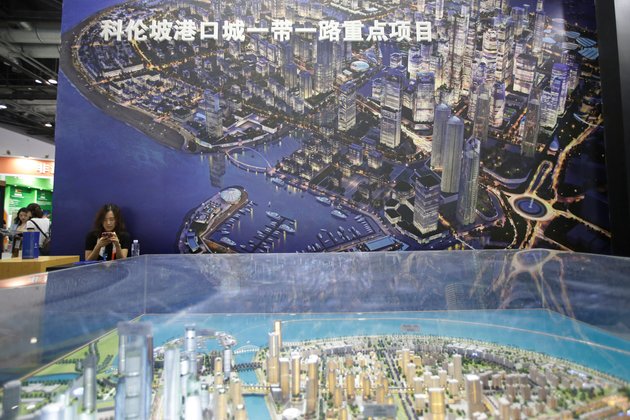 BEJING - China's Belt and Road Initiative (BRI) is regarded globally as the most ambitious project ever designed for building connectivity infrastructure like roads, railways and ports. New research shows, however, that China is investing just one-third of the BRI funds in connectivity infrastructure and instead is allocating two-thirds of the money for energy projects.

The investigation published by the Mercator Institute of China Studies (MERICS) in Berlin suggests that China is building energy facilities with the goal of relocating its surplus industrial capacity to nearly two dozen different countries, analysts said.

"China's initial focus on energy projects creates the preconditions for the next phase of the BRI: industrial build-up and new China-cantered supply chains," MERICS said in its report, "Powering the Belt and Road."

A portion of Chinese factories have moved to Vietnam and other places in Southeast Asia because of shrinking demand and new environmental laws that have made it impossible for many of them to continue using old machinery. China did its best to convince beneficiary countries it was keen to develop their infrastructure, such as roads, railways and ports. As a result, a large-scale migration of industrial capacity was not expected.

Shifting industries and producing goods in different countries would enable China to escape the tariff hikes imposed on it by the administration of U.S. President Donald Trump. The high tariffs already are causing serious setbacks for much of export-oriented industries in China. Those industrial sectors now are looking for alternative destinations that do not attract high tariffs from the U.S.

There are other reasons related to the domestic economy that are prompting the outsourcing to other nations.

"The Belt and Road was supposed to provide a runway for some excess capacity, but it may have allowed China's bloated state-owned enterprises to delay much needed downsizing," said Jonathan Hillman, senior fellow at the Center for Strategic and International Studies (CSIS) in Washington.

Many of the BRI projects are "more geared toward China's growth rather than the growth of the project's host country," said Ashley Johnson, project manager for Trade, Economic and Energy Affairs at the National Bureau of Asian Research (NBR).

"These projects are usually constructed by Chinese firms, allowing for the use of excess materials, such as steel, and the ability to take advantage of its own products that have similarly cornered global markets, like solar panels," she said.

Johnson said China's success in promoting the projects abroad is partly due to the huge unfulfilled demand of a billion people who still have no electricity. Developing and less developed countries are unable to find financial backing for coal-based projects because of the environmental risks involved.

"China is filling a financing gap that many development banks cannot, or in the case of fossil fuel projects, will not support," she said. "Whether the funding goes directly to energy or to connectivity projects more broadly, China is helping these countries meet short-term needs and this is welcomed by many."

Faced with a slowing domestic economy and trade challenges from Washington, China is focusing on projects that can be completed in a short period and those that promise good return on investments. Electricity projects serve these requirements much better than long-term projects like roads, railways and ports.

"Energy projects can be attractive because they provide more options for recouping investment, as compared to roads and railways," Hillman of CSIS said.

"But they face many of the same challenges, in terms of delays and cost overruns, and they can have additional environmental challenges," he noted.

NBR's Johnson said China also is trying to strengthen its own energy security through these projects. "China is ensuring a diverse range of energy and electricity suppliers" by investing in oil and liquefied natural gas terminals, and electricity generation in neighboring countries.

China has been an advocate of green development based on new energy sources like solar and wind power, in addition to the use of batteries in vehicles. But when it comes to BRI projects in other countries, Beijing thinks differently, according to MERICS.

"China is encouraging its energy companies to seek contracts abroad without necessarily prioritizing any sector - Beijing is neither leading a 'green' revolution nor a fossil-fuel revival, but rather playing both sides," the Berlin-based institute said.

It also found that China's energy projects are spread across vast regions. Latin America leads the rest in terms of the volume of completed investments, mostly into renewals and energy distribution. Southeast Asia boasts the highest number of projects, mostly coal-based plants.