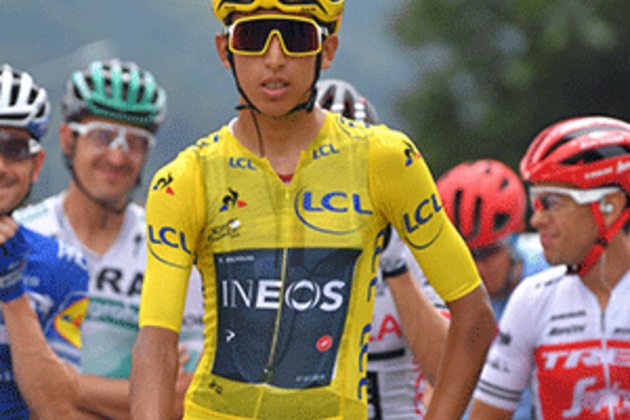 Val Thorens - Geraint Thomas admitted on Saturday that he never thought team-mate Egan Bernal would succeed him as Tour de France champion but backed the 22-year-old Colombian to keep winning.

The Welshman came into the race as hot favourite to retain his title, but after a series of falls was big enough to allow his young co-captain the space to push for victory during a trio of Alpine stages that put Bernal in the yellow jersey.

"If my experience is anything to go by then he's got an amazing year ahead of him and it's been an honour to be part of this," said the former Olympic track champion.

"To be honest I didn't think Egan was going to win this year, but the talent has been evident for all to see.

"He's got many years of success ahead of him, a humble guy with a great future."

Thomas admitted he had intended to defend his title and come away with back-to-back wins, insisting at the start in Brussels he was no one-hit Tour de France wonder.

"This year and last year are like black and white, everything that could go wrong went wrong," he said.

"Last year I had no falls, no punctures, no problems - a bit like Egan this year.

"I would have loved to have won but there you go, the fact a teammate won makes it easier," added the 33-year-old.

Bernal did not appear to attempt to usurp Thomas, and the senior co-captain praised his ethics and values as he became the first Colombian to win the Tour and youngest in 110 years.

"Crossing the line with Egan today was an incredible feeling," Thomas said of the moment the pair crested the 33km summit of Val Torrens knowing they were in a 1-2 position.

"We always work as a team and that is why we have been so successful. I told Egan not to worry about the crying because all real men cry."

"He's an incredible talent and can dominate the race for years to come."

Thomas also had words of encouragement for Julian Alaphilippe, who thrilled France with 14 days in the yellow jersey before his meltdown on the Col de l'Isore on Friday under Bernal's relentless pressure.

"I know it's easy to say but he has to put that behind him now and look forwards and carry on working, he'll get over it," said Thomas, who during the Tour had posted a photo of himself with Alaphilippe with the legend "me and the darling of France".