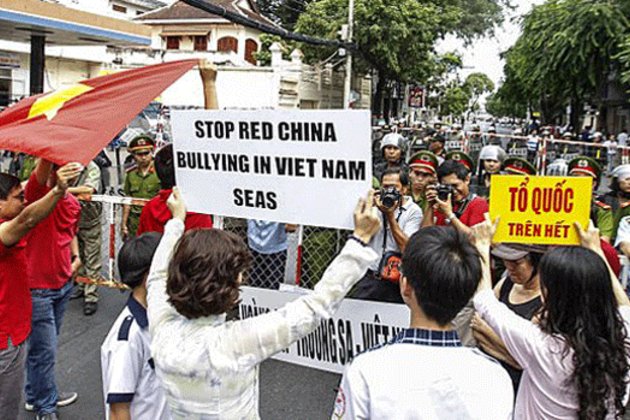 "For all these reasons, Vietnam demands that China immediately stop this activity and remove the vessels," Hang said.

This is the third time that Vietnam has demanded China withdraw from Vietnamese waters since the ships' Aug. 13 return, VN Express noted in its report.

It moved out of Vietnam's EEZ on Aug. 7 and toward Fiery Cross Reef, a militarized reef occupied by China farther out in the South China Sea, but later returned under escort, prompting new demands from Vietnam that it leave.

A large Chinese crane vessel, the Lan Jing, has also recently been seen sailing near Vietnam's EEZ, Hang said on Thursday, adding, "The vessel's activities are being observed by Vietnamese authorities in accordance with international laws," VN Express said in its report.

Under provisions set by the 1982 United Nations Convention on the Law of the Sea (UNCLOS), foreign ships may sail past other countries' waters but may not conduct surveys there.

"Acts that hinder Vietnam's oil and gas activities in its [own] waters are violations of international law and the UNCLOS," Hang said on Thursday.

China claims nearly all of the South China Sea, called the East Sea by Vietnam. The Philippines, Taiwan, Brunei, Malaysia, and Vietnam also have overlapping territorial claims to the sea, which is vital to international shipping and trade.