Roglic survives fall and attack on Vuelta day of drama 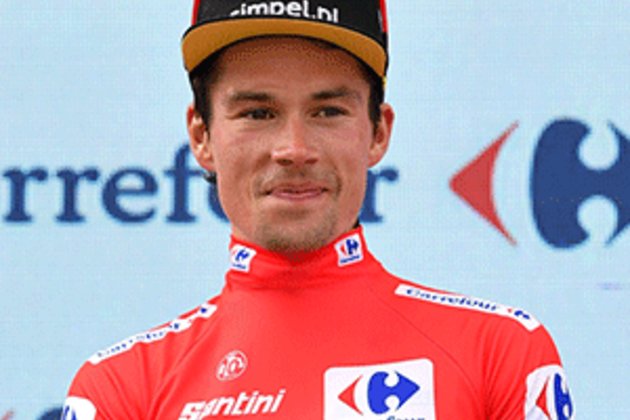 Toledo - Frenchman Remi Cavagna of Deceuninck-Quick Step, the lone survivor of a breakaway, won stage 19 of the Vuelta a Espana on Friday as leader Primoz Roglic again rode his luck to keep overall victory in sight.

Racing across the seemingly peril-free sun-bleached plains from Avila to Toledo, Roglic was brought down in a mass fall. His closest rivals in the Movistar team reacted by speeding away.

The move is considered unsporting in cycling circles.

"There will be a great deal of explaining to do about that," said Belgian veteran Philippe Gilbert, who has won two stages here, at the finish.

The two Movistar riders who are Roglic's closest challengers, World Champion Alejandro Valverde and Nairo Quintana, quickly put a minute between themselves and Roglic, but with 60km still to race, the 20-man escape group began to argue and gave up on their attack.

"We had orders to roll and later they told us to stop and wait, don't ask me, ask them," Marc Soler of Movistar later told French television.

Lopez, who rides for Astana, was angry with Valverde and Movistar.

"A world champion should not behave like that and it's not the first time they've done it," Lopez said. "I've seen it."

Further up the road an escape group took better advantage of the chaos behind and went for broke as they chased the stage win in ancient capital Toledo.

When Cavagna launched his move 20km from Toledo no one could follow and the wily rider timed his run to win by just five seconds from a desperately speeding peloton at the hilltop finish in front of the colossal cathedral that looms above the city.

"I was really suffering with all the crosswinds, but when I saw them coming up the hill behind me I knew I'd won," said Cavagna, who took his team's fourth victory in this year's Vuelta.

Roglic seized control of the overall standings by pulverising his rivals on the individual time-trial in stage 10.

Surrounded by a powerful Jumbo team, Roglic then systematically demoralised pretenders on the mountains, proving unshakeable in the climbing stages.

Saturday's mountainous stage in the Sierra outside Madrid will present one last chance for a shake up before Sunday's parade stage.