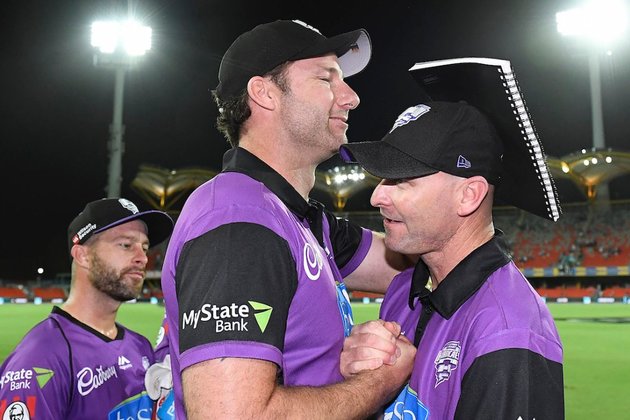 Tasmania have promoted assistant coach Jeff Vaughan to take over the main coaching role during the Sheffield Shield portion of the season in a move designed to give head coach Adam Griffith a different perspective on Tasmania's cricket program while developing Vaughan's coaching credentials.

Griffith is the head coach of Tasmania as well as Hobart Hurricanes in the BBL. Adam Voges (WA and Perth Scorchers) and Andrew McDonald (Victoria and Melbourne Renegades) are the only other men who coach teams across all three formats in Australian domestic cricket.

Griffith took time away from Tasmania's pre-season to do a short-term stint as Australia's bowling coach during the World Cup campaign in England, which allowed Vaughan to run the early part of the preparation for the summer. Griffith's previous experience under Justin Langer in Western Australia, where he was given opportunities to take the reins for various short-term domestic assignments, gave him the confidence to promote Vaughan to look after the Shield side for the entire summer.

"It's something I've been thinking about for 6-12 months now, on how to continually develop our people," Griffith told ESPNcricinfo. "One of my passions is not only developing our players but helping our coaches develop, including myself.

"We were contemplating whether I should step back for a couple of games on tour, which is something that happened with me in WA, I was allowed to take the team away at times and lead the group.

"When we sat down and looked at the schedule this year, we've got a new High Performance Manager and a new CEO coming in and I think it's a really important time for our organisation as a whole and our high performance department as a whole, and giving Jeff the opportunity to lead the team on game day and have that autonomy as head coach will hopefully help his development in his space and also allow me to continue to run the program.

"I'll still continue to be the head coach of Tasmanian cricket but on [Shield] game days and leading into the games, Jeff will have that opportunity. I'll still be involved with the Shield team and still working with the bowlers and I'm really looking forward to seeing how Jeff progresses. He's earned the right to have this opportunity."

Vaughan's coaching stocks continue to rise. His influence on Matthew Wade as a batting mentor since returning to Tasmania has not gone unnoticed following Wade's impressive return to international ranks after dominating domestic cricket.

"He's already starting to think about the Shield, which is brilliant," Griffith said. "He's already starting to think about how the team needs to prepare and some training sessions and how we want to play, do we tweak last year, do we do the same things, selection of the team and that sort of stuff. He's doing that now while I'm focussing on how we're going to win our first four one day games. That allows us to do that and it allows me to get my head up out of the sand a little bit and have a look at our whole program."

Griffith's own stocks are high as Tasmanian cricket continues to rebound strongly following an exhaustive independent review in early 2017, led by former Australian great Michael Hussey, after a sustained period of poor results across all formats.

Griffith is highly regarded by Langer having worked closely with him during his entire tenure in WA prior to becoming Australia coach. Langer is looking to reshape his own coaching team and CA are yet to find a full-time appointment to replace David Saker, who ended his time as Australia's bowling coach last summer and Brad Haddin's contract as Australia's fielding coach has also come to an end.

Griffith said his move to step back from the Shield commitments has nothing to do with the Australian team at this stage. The exit of experienced Cricket Tasmania chief executive Nick Cummins, to a role with Cricket Victoria, and high performance manager Drew Ginn, who has been appointed new executive general manager of high performance at Cricket Australia, has left Cricket Tasmania with some holes to fill. They are still searching for a new CEO but have appointed Simon Insley as Ginn's replacement.

Griffith will coach Tasmania's Marsh Cup squad as their campaign starts in Perth on Monday. Jordan Silk will captain the side for the first two games in the absence of Wade, who is being rested following the Ashes series. Ben McDermott will keep wicket.