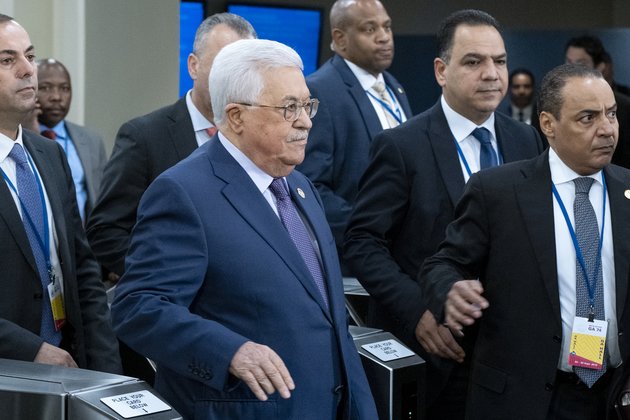 Afshar Sigarchi of VOA Persian contributed to this report from New York.

UNITED NATIONS - World leaders gathered at the U.N. General Assembly in New York are likely to hear Thursday about the Israeli-Palestinian conflict as officials from both sides get their turn to address the annual meeting.

Palestinian President Mahmoud Abbas is scheduled to give his speech in the morning. Israeli Prime Minister Benjamin Netanyahu is home trying to form a government after elections last week, so Foreign Minister Israel Katz will give the afternoon address at the U.N.

The uncertainty surrounding Britain's exit from the European Union could also be on the agenda with EU Council President Donald Tusk scheduled to speak as well. British Prime Minister Boris Johnson did not talk about Brexit in his own address this week, and he was dealt a blow by Britain's Supreme Court in a ruling calling his decision to suspend parliament unlawful.

Rouhani on US sanctions

Wednesday at the U.N. featured Iranian President Hassan Rouhani telling world leaders there would be no negotiations with the United States as long as economic sanctions remain in effect.

"We once negotiated under sanctions. We will not do so again. Halt the sanctions and return to your commitments so the dialogue may reopen," he said at the U.N. General Assembly.

The U.S. imposed measures targeting Iran's key oil industry after withdrawing last year from the 2015 agreement that limited Iran's nuclear program. The Trump administration said that deal between Iran and world powers did not do enough to prevent Tehran from developing nuclear weapons or engaging in other perceived malign behaviors.

Tehran has since surpassed some of the 2015 agreement's limitations, arguing that the other signatories are not living up to their part of the agreement, particularly ensuring it gets sanctions relief.

"For one year, Iran remained fully faithful to all of its nuclear commitments in the JCPOA," Rouhani said, referring to the nuclear deal by its acronym. "We provided Europe with the opportunity to fulfill its 11 commitments made to compensate for the U.S. withdrawal. However, unfortunately, we only heard beautiful words, while witnessing no effective measures."

European efforts to keep Iran in compliance with the deal by easing some of its economic pain through a special trade mechanism have not provided the scope of relief Tehran seeks.

"We will continue to work together with the unity of purpose to try and preserve it, without ignoring the challenges," said European Union foreign policy chief Federica Mogherini of the nuclear deal. "As you know, the agreement has two pillars - the nuclear commitment and the economic side that is linked to the sanctions lifting. On both elements, there is full determination to try and preserve the agreement," she told reporters at the United Nations after a meeting Wednesday morning with the remaining participants of the nuclear deal.

She acknowledged that since the U.S. withdrew from the deal last year and Iran has begun to take steps away from its commitments, saving the deal is becoming complicated.

"I will not hide that it is increasingly difficult to do it, and we have discussed today the fact that we will try and continue keeping the agreement in place and overcome the difficulties we are facing," Mogherini said.

In his speech, Rouhani made clear that Tehran's "patience has a limit."

He also alluded to earlier hopes that this week's U.N. gathering could provide a venue for an encounter between himself and President Trump.

"Memorial photos are the last station of negotiations, not the first one," Rouhani said.

In an interview with VOA Persian in New York, exiled Iranian opposition activist Reza Pirzadeh accused Rouhani of hypocrisy for demanding the lifting of U.S. sanctions before any talks with Washington.

"The real sanctions engulfing the Iranian people are the restrictions imposed upon them by the regime itself," said Pirzadeh, a political officer of the Iran National Council for Free Elections group. Iranian opposition activists long have accused Iran's Islamist rulers of suppressing dissent and committing human rights abuses.

The Iranian president began his speech by denouncing U.S. plans to unveil a peace deal to resolve the long-running conflict between Israel, a U.S. ally, and the Palestinians, whom Tehran traditionally has backed. Rouhani said the U.S. peace bid is doomed to fail and called the Palestinian people "the biggest victim" of turmoil in the Middle East.

London-based Iranian political analyst and critic of the Iranian government Alireza Nourizadeh told VOA Persian that Rouhani was being duplicitous in expressing support for the Palestinians.

"By providing support to chaos and warmongering, the Iranian regime prevented a peace process from coming to fruition whenever the prospect for peace was strong. Hence, the regime is not a friend of any nation," Nourizadeh said.

Rouhani's address came a day after President Trump labeled the Iranian regime one of the greatest global threats. Trump told the General Assembly that Tehran oppresses its citizens at home while fueling conflicts and terrorism beyond its borders.

He said as long as this continues, U.S. sanctions would be tightened, not lifted. But he left open the door to diplomacy, noting that some of America's past enemies are now its closest friends.

Speaking in New York alongside Trump at a Wednesday press briefing wrapping up U.S. involvement in the General Assembly session, Secretary of State Mike Pompeo did not mention Rouhani's remarks but said the U.S. made "real progress in uniting the world" behind the administration's Iran policies.

"We hope we can get the opportunity to negotiate with (Iran) ... to make sure that they never have a nuclear weapon and that they can't foment their terror with ballistic missiles in the way they have all around the world," Pompeo said.

Saudi Minister of State for Foreign Affairs Adel al-Jubeir told reporters at the U.N. that his government has launched an investigation to establish the location from which the missiles and drones from the Sept. 14 attack came.

"The Initial investigation results indicate proof that these were Iranian weapons, so we hold Iran responsible for this," Jubeir said.

U.N. missile experts have also gone to Saudi Arabia to support the investigation. Jubeir said once all work is done, Riyadh will decide its next steps in consultations with its allies.

"The key to this is that Iran's behavior cannot continue like this," he said. "Iran must abide by international law. Iran must comply with a rules-based international order. Iran's aggressive behavior must be checked."