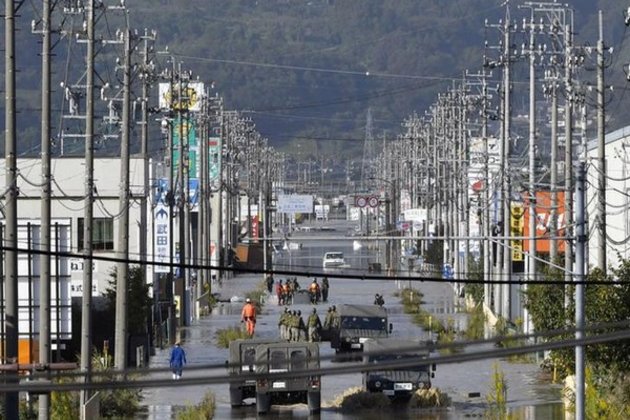 Tokyo [Japan] Oct 13 (ANI): At least 26 people have died and 175 others left injured in typhoon Hagibis. As many as 18 people are missing.

Japanese Prime Minister Shinzo Abe on Sunday said that more than 110,000 personnel from the police, Fire Department, Coast Guard, and Self-Defense Forces are taking part in the search and rescue operations.

Abe also said many people are suffering at emergency shelters, asking officials to send relief supplies to disaster-hit areas even if they haven't made any specific requests.

Railway operations in Tokyo and surrounding areas have been shut and will only resume after the Japanese authorities will check the safety of the local train services.

Earlier in the day, Japan was also rattled by an earthquake measuring 5.7 on the Richter scale, with its epicentre registered at a depth of 80 kilometres in the Chiba-ken region.

Many world leaders including Taiwanese President Tsai Ing-wen and Prime Minister Narendra Modi have sent their condolences to the people affected by typhoon Hagibis.

"I offer condolences on behalf of all Indians on the loss of life caused by super-typhoon Hagibis in Japan. I wish early recovery from the damage and devastation caused by this natural calamity," tweeted Modi. (ANI)