Hoping for your comeback like a champion: Mushfiqur Rahim to Shakib 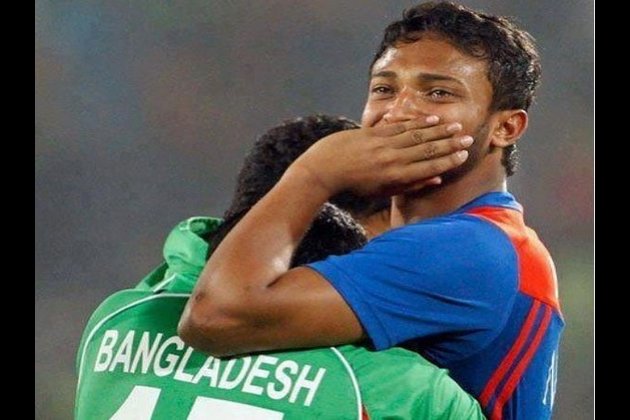 New Delhi [India], Oct 30 (ANI): As Bangladesh all-rounder Shakib Al Hasan is all set to miss cricketing action due to a ban enforced by International Cricket Council (ICC), his team's wicket-keeper batsman Mushfiqur Rahim has expressed solidarity with the cricketer and said he is hoping for Shakib's come back like a champion.

Rahim posted a picture with Shakib on Instagram and captioned the post as: "Age level.. international... over 18 years of playing cricket together... very sad to even think about playing without you on the field. Hoping that you come back soon like a champ. You always have my support and the whole of Bangladesh. Stay strong In Sha Allah".

Bangladesh skipper Mashrafe Mortaza also posted a picture with Shakib on Facebook, saying, "I will definitely spend some sleepless nights. But after a few days, we will be able to sleep in peace that we will play in the world cup final in 2023 because the name is Shakib Al Hasan".

Shakib was banned from all forms of cricket on Tuesday after he accepted the charges of breaching the ICC's Anti Corruption Code. The all-rounder also admitted to the charges and agreed to the sanction with the ICC in lieu of an Anti-Corruption Tribunal hearing.

Shakib will be able to resume international cricket from October 29, 2020, however, it is subject to him satisfying the conditions of the sanction.

After getting banned by the ICC, Shakib said: "I am obviously extremely sad to have been banned from the game I love, but I completely accept my sanction for not reporting the approaches. The ICC ACU is reliant on players to play a central part in the fight against corruption and I didn't do my duty in this instance".

"Like the majority of players and fans around the world, I want cricket to be a corruption-free sport and I am looking forward to working with the ICC ACU team to support their education programme and ensure young players don't make the same mistake I did," he added.

Shakib also decided to step down from the Marylebone Cricket Club's Cricket Committee after getting banned for two years.

"We are sorry to lose Shakib from the committee, where he has made a great contribution over the last couple of years. As guardians of the spirit of cricket we support his resignation and believe this was the right decision," Mike Gatting, Chairman of the World Cricket committee said.

Shakib had joined the committee in October 2017, and he subsequently attended meetings in both Sydney and Bengaluru. (ANI)