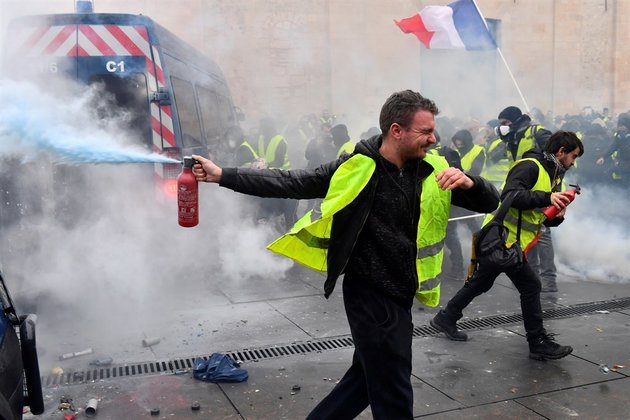 A French police man appeared in court on Thursday for hurling a paving stone at protesters during a "yellow vest" rally, the first member of the security forces to face trial after numerous allegations of police brutality during the weekly protests.

The case comes just days after the first anniversary of the anti-government rallies, which were again marked by rioting and vandalism last Saturday.

It is the first arising from 212 cases of alleged police brutality being investigated by the IGPN police oversight body.

Demonstrators accuse police of using excessive force to suppress the movement, in particular the use of rubber bullets which activists say have caused some two dozen people to lose an eye.

Around 2,500 demonstrators and 1,800 security force members have been injured since the protests began, according to an official count.

On Saturday, another demonstrator lost an eye after being hit in the face, apparently by a police tear gas canister. A video showed him standing in a group talking when he was struck.

The 44-year-old officer on trial Thursday was also caught on camera in the act of throwing the stone. The video did not show where the stone landed or if anyone was hit.

He risks up to three years in prison and a fine of 45,000 euros ($50,000) if convicted of "deliberate violence by a person in a position of public authority".

The SGP police union has accused the judiciary of trying to make a "scapegoat" of him and argued that he had acted in self-defence.

His lawyer Laurent Boguet told the court that May 1 was a "very violent day" on which police had come under attack from stone-throwing protesters.

Among those hit was the accused's commanding officer, who was struck in the face by a paving stone and badly injured.

The fierce violence that flared during the protests last winter made headlines worldwide, with rioters running amok in Paris and other cities, smashing shopfronts, torching cars and looting businesses.

Yellow vest protests in rural France have been relatively peaceful, by contrast.

The riot police officer on trial in Paris is from a unit based in the southwestern city of Toulouse that was sent to the capital as backup.

His lawyer moved to have the charges dropped, noting that no plaintiff had come forward in the case.

Another officer is set to stand trial in the coming weeks for slapping a protester in the face during the same May 1 protest in Paris, a scene also caught on video.

Activists say that in addition to those blinded, five yellow vest protesters have lost a hand to police stun grenades, and one a testicle, while dozens of others have sustained other injuries.

The protests erupted on November 17 last year over a planned fuel tax increase, which quickly snowballed into a general revolt against President Emmanuel Macron's policies.

His critics accused the former investment banker of ignoring the daily struggles of the working poor in rural and small-town France.

Although the Saturday protests have fizzled in strength in recent months, Macron is facing a major strike called by unions for December 5 against planned pension reforms, which could be bolstered by yellow vest support.