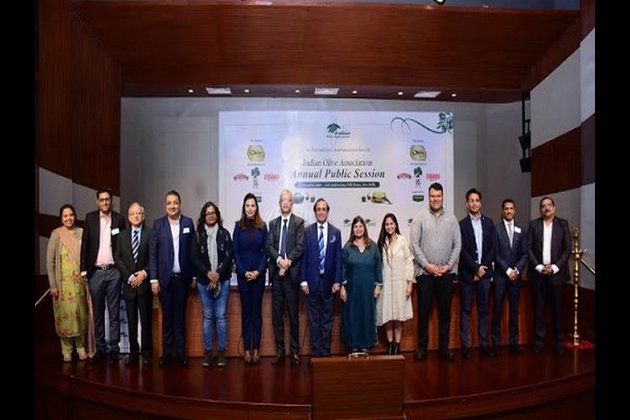 Rahul Upadhyay, President and Akshay Modi, Vice-President at The Indian Olive Association (IOA) organised the panel discussion to speak of the ascending graph of the product which made it from being a gourmet oil to becoming a regular in the Indian kitchen. The platform brought together experts from across the globe under one roof to discuss the eventual reach of olive oil and to encourage its growth in the country.

With prominent names stepping on the stage and acknowledging the importance of the oil which is now serving everyone equally as it became accessible to all under affordable prices, the event orbited around the significance of the product and the need to inculcate it in daily routine to promote a fitter and healthier lifestyle.

The panel emphasized the health benefits associated with Olive oil and why there's a need to switch from regular oil to olive oil. Further, how the olive oil industry has grown manifolds in the Indian ecosystem acting as a catalyst for a holistic lifestyle.

Highlighting the agenda of Annual Public Session 2019, Rahul Upadhyay, President, The Indian Olive Association (IOA), said, "Indian Olive Association intends to encourage the consumption of olive oil by promoting a healthier way to live. The Annual Public Session addresses the emerging industry of olive oil and endeavors to gather the maestros under one roof to discuss and resolve any concerns that obstruct the sector from growing."With the motive of the event being educating consumers about olive oil and its benefits, along with other information such as making people aware of the variants such as Virgin Olive Oil, Extra-Virgin Olive Oil, Pomace Olive Oil, etc with a neutral taste. Furthermore, IOA considered it imperative to inform people about olive oil's versatility and how it is suitable for Indian cooking as it could be used for cooking in high heat and frying.

The session addressed common consumer barriers and promoted the utility of olive oil. The panel discussion also talked about how some variants of the olive oils are absorbed up to 20% lesser than the other oils, leading to less overall consumption and being cost-efficient for people. Being worthy of their value, olive oils are a small price to pay for a better and healthier lifestyle, promoting comprehensive wellness.

Speaking on the occasion, Akshay Modi, Vice-President at The Indian Olive Association (IOA), said, "People often carry the misconception of olive oil being a luxury or that it is not suited to Indian food, which stands invalid, considering the fact that the oil has found a place in several Indian kitchens. With the panel discussion, we conveyed a message of the product being accessible and affordable for all. With the event concluding fruitfully, we hope that we are able to catalyse the growth of the olive oil industry and cater to every family with a healthier, fitter lifestyle."The Indian Olive Association (IOA), the apex body for olive oil in India, is affiliating with olive oil producers, growers, distributors, importers, users and consumers in India. It aims to encourage people to opt for a healthier choice as they choose olive oil for a fitter lifestyle.

Acknowledging the issues concerning the sector and working towards resolving them, IOA (with multiple authorities) takes up macro-economic factors like GST, Import Duty and concerns with respect to the import of both table olives and olive oil to streamline the import process and ensure consistent development of the emerging sector.

IOA consistently disperses data on significant aspects, for instance, growth trends in olive oil, trade statistics, essential government notifications, food standard parameters, mandatory packaging and labeling laws amongst others, through its quarterly bulletin. Maintaining the global standards for quality and labeling, the association strives to establish procedures to assure best practices for labeling and quality for the various types of olives and olive oil and protect the interests of the consumer.

This story is provided by NewsVoir. ANI will not be responsible in any way for the content of this article. (ANI/ NewsVoir)