You have to ask Virat why is he so animated: Kieron Pollard 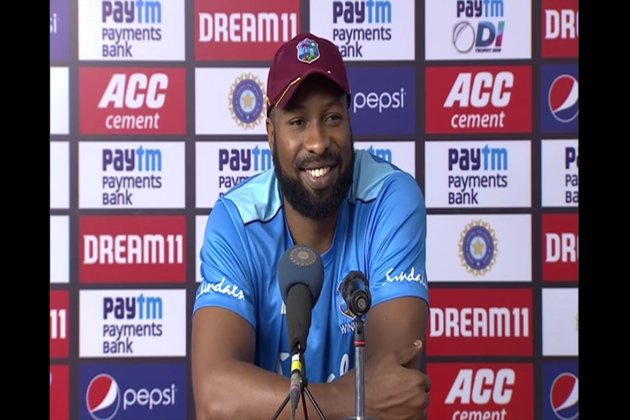 Vishakapatnam (Andhra Pradesh) [India], Dec 18 (ANI): After losing the second ODI of three-match series against India by 107 runs, West Indies skipper Kieron Pollard on Wednesday made a cheeky remark, saying people need to ask Virat Kohli as to why he is so animated on the field.

Pollard had dismissed Kohli for a first-ball duck in the second ODI and after that, he was seen running on the ground celebrating the Indian skipper's dismissal.

Kohli has been animated throughout the ongoing series, be it mocking Kesrick Williams' trademark notebook-celebration style or celebrating after registering a boundary off the bowling of Windies' pacers.

"You have to ask him why is he so animated. I cannot answer that. You need to ask him," Pollard told reporters after the conclusion of the second ODI.

India had scored a mammoth score of 387/5 in the allotted fifty overs, and later the side managed to bundle out the visitors for 280 runs, registering a win by 107 runs.

Rohit Sharma and KL Rahul scored centuries for India. During their chase, Windies were going well at 192/3, but the side then suffered a collapse and was reduced to 210/8.

Kuldeep Yadav took a hat-trick for the hosts.

Pollard also heaped praise on opening batsman Shai Hope after he went on to register a score of 78. The opener had also scored a century for the visitors in the first ODI of the series.

"It is what it is. It happens. When you lose wickets in a cluster, you will put yourself under pressure. Guys had to go out and express themselves. Having said that, in my opinion, the game changed in the last twenty overs as we conceded runs. You take it. We put up a good fight, proud of the guys. Hopefully, we put up a better performance in the next match," Pollard said.

"Sometimes you get carried away by so many stats and data. You cannot build a team with the guys, who just play shots. You need to have a batsman, who plays the role of the anchor. We have identified Shai as the guy to lay down the foundation for us. Everyone has roles and responsibilities. It is about building blocks. It is a work in progress for us," added Pollard.

Windies players dropped two-three chances in the match against India, but Pollard brushed aside the question as he said that the team has been consistent with their fielding over the T20I series and the first ODI.

"Fielding is an attitude. Anticipation and awareness are two key factors when it comes to fielding. At the international level, you cannot drop batsmen. As a fielding unit, we have been decent. Yes, we dropped chances today but over the last few days, our fielding has been decent," said Pollard.

Currently, the three-match series is levelled at 1-1 and both sides will now face each other in the final ODI on Sunday, December 22. (ANI)