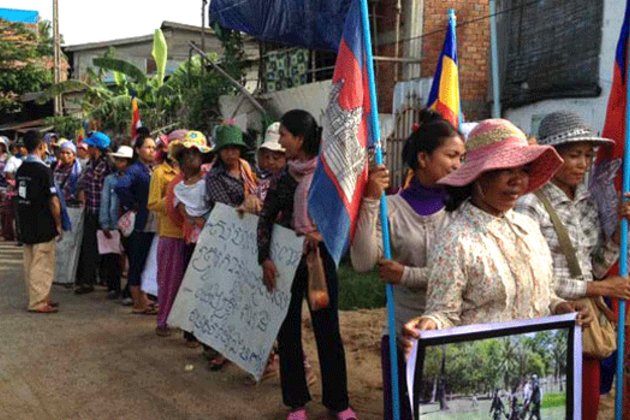 Local authorities in central Cambodia's Kampong Chhnang province have warned villagers locked in a land dispute not to listen in groups to reports by Radio Free Asia, saying that broadcasts heard over loudspeaker have disturbed their neighbors, sources in the region said.

The residents of Lor Peang village in the Kompong Tralach district's Ta Ches commune have protested for almost 20 years over the confiscation in 2002 of around 455 acres of farmland by KDC International, a company run by Chea Keng, wife of Cambodia's then Minister of Mines and Energy.

Villagers have refused for years to accept compensation packages offered by KDC, saying that they say are too low to allow them to move off the land.

Speaking to RFA's Khmer Service this week, Lor Peang community representative Snguon Nhoeurng said that local authorities have now ordered him to sign an agreement not to listen to amplified RFA reports heard by interested villagers in morning gatherings.

For almost a month, village residents wanting to follow political developments and other issues not covered by Cambodian media have tuned into the broadcasts, the village leader said, calling the order by authorities to stop listening a violation of their human rights.

"I run the radio broadcasts through a microphone so people can hear the news," he said. "Some people don't have smartphones or access to the internet, so they like listening to the radio in a group. But now they have threatened us, telling us we must sign an agreement to stop, or else we will be arrested."

Efforts by officials to block villagers' access to RFA and other independent radio stations are an attempt to force Cambodians to listen only to stations supporting the government, which don't air stories about controversial social issues, Snguon Nhoeurng said.

"I don't listen to those radio stations anymore," he said. "They only broadcast 'good news,' never anything about the bad news."

Also speaking to RFA, Sum Chankea-provincial coordinator for the Cambodian rights groups Adhoc-said that authorities should have told villagers only to lower the volume of the broadcasts they listen to, adding that their right to gather and to freely access information is guaranteed by Cambodia's constitution.

The move paved the way for the CPP to sweep the ballot in national elections last year, effectively turning Cambodia into a one-party state.

Cambodian journalists working for RFA had reported over the years on corruption, illegal logging, and forced evictions, among other stories largely ignored by pro-government media, and authorities had already closed independent radio stations carrying RFA reports, using a pretext of tax and administrative violations.

Land disputes are a bitter problem in Cambodia, where rural villagers and urban dwellers alike have been mired in conflicts that a U.N. special rapporteur for human rights in Cambodia has warned could threaten the country's stability.

The country's land issues date from the period of the 1975-79 Khmer Rouge regime, which forced large-scale evacuations and relocations, followed by a period of mass confusion over land rights and the formation of squatter communities when refugees returned in the 1990s after a decade of civil war.