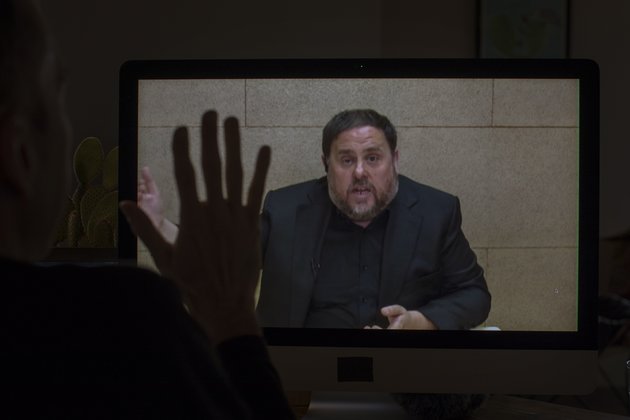 MADRID - Spain's state attorney called Monday for an imprisoned Catalan politician to be allowed to be sworn in as a member of the European Union parliament, a step that could ease the way for a center-left governing alliance to take office in the country.

The European Union's top court ruled this month that Oriol Junqueras, who served as Catalonia's vice president until 2017, had the right to parliamentary immunity when he was elected to the bloc's parliament in May, when he was already on trial.

In response to the ruling, the Spanish state attorney's office on Monday said that Junqueras should be allowed to leave prison to take his seat. But it said that a request should be made immediately for the European Parliament to drop the separatist politician's immunity, so that he would serve the 13-year prison term for his role in a secession bid two years ago.

The Supreme Court is expected to make a decision in coming days.

Junqueras remains the leader of the Catalan ERC party, whose 13 lawmakers' abstention from the 350-seat Congress of Deputies would allow the Socialists of caretaker Prime Minister Pedro Sanchez and the anti-austerity United We Can (Unidas Podemos) to form a minority coalition government after months of political impasse in Spain.

The state attorney's move could lead ERC to abstain from the confidence vote, expected as soon as next week. ERC has said it will make its final decision in a party meeting next week.

In a further sign of an impending end to the political deadlock, Sanchez and United We Can leader Pablo Iglesias were set to announce later on Monday their governing agreement, a 50-page document outlining more taxes for high-earning individuals and companies, plans to water down a labor reform passed in 2012 at the height of the financial crisis, as well as increases to spending on social policies.

They also plan to roll back a national security law passed by a previous conservative government and increase the minimum wage, which stands at 1,050 euros (1,176 dollars), according to Spanish daily El Pais, which obtained a copy of the document.

Spanish laws allow minority governments to be formed as long as they receive more votes in favor than against in the parliament's lower house. But even with the support of a small Basque nationalist party, Sanchez and Iglesias need ERC's abstention. They have been widely criticized by other parties for relying on the help of an imprisoned separatist.

The 50-year-old Junqueras was convicted of sedition and misuse of public funds in October for his role in promoting the illegal 2017 secession bid of the prosperous northeastern region of Catalonia, which includes the city of Barcelona.

He was under trial already when he decided to run in the European elections in May. Spain's Supreme Court denied Junqueras permission to get out of jail at the time to take his position.

'Against the interests of Spain'

Pablo Casado, leader of the conservative Popular Party that for decades took turns in power with the Socialists, said that Sanchez was being opaque in the negotiations and that, as an interim prime minister over the past few months, the Socialist leader had governed "against the interests of Spain."

"You can't negotiate the government of Spain with those who want to break it apart," Casado told reporters.

The Popular Party, the fast-rising far-right Vox party and the center-right Citizens (Ciudadanos), which suffered a big defeat in the Nov. 10 repeated general election, together hold 150 seats in the lower chamber.