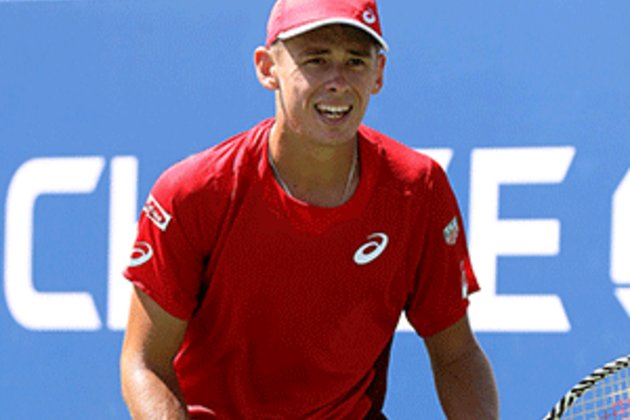 Adelaide - World No 7 Belinda Bencic won her first match of the season Monday, but there was agony for Alex de Minaur as the men's top seed pulled out of the Adelaide International.

The Swiss 22-year-old, a wildcard entry who lost her opening match of the year last week in Shenzhen, beat good friend Daria Kasatkina of Russia 6-4, 6-4.

Bencic, who had lost her last two matches against the qualifier, overcame hot conditions at Memorial Drive as she makes final preparations for next week's Australian Open.

She survived a first set against Kasatkina featuring five breaks of serve and secured her second-round place with a break in the final game of the second.

"It was very difficult, but I like the heat and I'm happy to be here for the first time," said Bencic, who soared up the rankings last year and won two titles, in Moscow and Dubai, on her way to a career-best 49 main draw match wins.

"Her game is really tough, it doesn't match up with mine. I had to work hard."

Russia's Anastasia Pavlyuchenkova, American Danielle Collins and Croat Donna Vekic were among other women to clear the first hurdle.

A devastated De Minaur withdrew due to an abdominal injury, casting doubt over his fitness for the first major of the season.

He was the second seed to pull out of the ATP-WTA event after Novak Djokovic opted to head instead to Melbourne to prepare for his title defence at the opening Grand Slam of the year after leading Serbia to the ATP Cup title in Sydney.

"I re-aggravated an abdominal injury and have had to withdraw," said De Minaur, who had an intense week leading Australia at the ATP Cup teams event. "It's devastating, Adelaide has been part of my schedule for a long time."

De Minaur did not mention the Open, which starts on January 20, but gave every indication that he was facing a race to be ready.

"My sole focus is making sure I recover for the next one," added the 18th-ranked player, who helped Australia to the semi-finals at the ATP Cup, winning two of his four singles and pushing world number one Rafael Nadal hard over three sets.

Results on day two of the ATP-WTA Adelaide International at Memorial Drive: